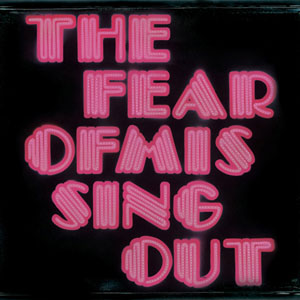 Skimming over thenewno2′s past three years, it’s tough to figure out what exactly Dhani Harrison and Paul Hicks are out to accomplish with their nearly unclassifiable music. Harrison’s father was a Beatle, Hicks makes electronic music, and the collective has featured Regina Spektor and dabbled in rap. None of it seems to add up. 2009’s You Are Here received a warm welcome from critics, though adjectives and genres used ranged from Beck comparisons to psychedelic rock to light trip-hop. On the closing track of their sophomore LP, thefearofmissingout, Harrison finally spells it out pretty clearly: “See the thing about the number two, it’s mysterious.” They like transcending strict definition, and this proves to be the album’s strength and downfall.

Each song on thefearofmissingout works through both live and programmed instruments, the constants being glitchy electronic noises atop rich beds of guitar and keys. When at their best, the band makes for a sort of poppy Radiohead, creating mesmerizing grooves like “Timezone”, where the subtly harmonized vocals nicely offset the dark lyrics and Harrison’s surprisingly wide-ranging vocals.

Another highlight, “Make It Home”, oulines a classic, psychedelic rock blueprint modernized with warbled bass. The stylistic differences between the two is striking, yet their shared status as album standouts (along with the surprising consistency the band manages to achieve) attests to the talents of the group and their exploratory ambition.

While half of the album succeeds in combining a slew of genres and sonic elements into a cohesive mix, the experiments don’t always work so well. Particularly weak is the rap track “thewaitaround”, featuring overly aggressive drum machines and an unsettling repetition of the opening lines. Harrison, Hicks, and company also fall short in keeping the longer tracks engaging, which is unfortunate considering the fact that four of the ten clock in at over five minutes.

With a theme and title such as thefearofmissingout, it’s only appropriate for the group to venture out of their comfort zone, trying everything new to assuage the fear of missing out. With that curiosity satisfied, the future is bright for thenewno2, as a group with this much adventurous spirit is unlikely to dwell on the mishaps of the past.