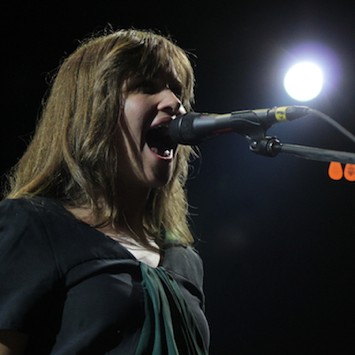 Brooklyn’s a weird place. Case in point, prior to Purity Ring’s sunny seven p.m. set at New York’s Prospect Park last night, those who arrived early were treated to free blankets and ice cream — yeah, exactly. Still, that only bolstered what was essentially a mini festival of a bill: Purity Ring, Wye Oak, and Dirty Projectors. Sure, the three bands might not draw too many parallels musically, but you’ve got to love those rare times when the ticket price is actually over-justified. Also, what a fucking Tuesday night, right?

Montreal’s Purity Ring turned some heads back in January of 2011, but spent the better part of the year behind-the-scenes. Then April happened, when they signed to 4AD, and announced the release of their debut LP, Shrines. Despite an early set time, which really only hindered the appeal of their flashy DIY light rig/keyboard setup, the Canadian duo covered most of their ground in full glitch-pop force. Singer Megan James was exactly as one would hope for on stage, exuding hints of childlike glee and yet shyness at the same time. Although, she playfully bashed a mounted drum at the wrong beat, she flawlessly hit each melody, conjuring up proper buzz for their LP, which surfaces in a couple of weeks.

As per tradition, Wye Oak made a lot of noise for just two people. The Baltimore duo drew from 2011’s Civilian but also previewed tracks that may appear on their new LP, as well. One song even had drummer/keyboardist Andy Stack on a bass guitar, the first time he wasn’t playing two or more instruments at once. In some respects, Wye Oak feels like Beach House’s evil twin, another boy and girl duo that features bouncing two-string guitar parts, sultry vocals, and anticipatory crescendos– except, instead of organ, you have Jenn Wasner’s guitar, a little bit louder and a little more evil.

Don’t go nuts, but a setlist consisting of only Bitte Orca and Swing Lo Magellan might be the most “fun” Dirty Projectors show people have seen in years. In the past, their live sets have drawn from 2005’s The Getty Address and 2007’s Rise Above, but it’s a little hard to engage an audience with that material as impressive as it may be. Luckily, they struck a perfect balance at Prospect Park on Tuesday night.

Previously, ringleader Dave Longstreth would be center stage while the female members of the band were relegated to the same blocking that auxiliary horn section members have — almost as if they weren’t a part of the band but a little special addition for the live show. Now, Amber Coffman, Haley Dekle, and new member Olga Bell are spread out and armed with instruments. It’s been a revolving door for most of the Projectors’ entire career, but it finally feels like they’re a cohesive unit now.

Longstreth has loosened up a bit, too. While he still flawlessly executes every complicated guitar line and belts out jumps from an unspeakable range of octaves, he’s more comfortable doing it. The more whimsical material off Swing Lo Magellan – songs like “Dance For You” and “About To Die” — allowed for a greater deal of interplay on stage, and Longstreth certainly waltzed about the stage. Similarly, Coffman twirled around the stage while nailing the vocals to “The Socialites” and “Stillness is the Move”.

There were a couple of moments where Longstreth observed and just played conductor. The choir-ready “Beautiful Mother” had some insane three-part vocal syncopation between the girls, all through ironic lyrics (“We are singing in a simple rhythm”), and the operatic soprano vocal runs received the loudest applause of the night. Suffice it to say, Longstreth no doubt offered his own congratulations after the show, as well.

This slightly more unrestrained incarnation of the Dirty Projectors is a good look for them. As soon as the first drum fill hit in “Offspring Are Blank” and the band went into distorted mayhem, it became apparent that it’s not all just calculated and complicated stuff for music theory enthusiasts. While there are still moments that you’ll be embarrassed to try singing along to, there are now more that will at least make you try.

Setlist:
Swing Lo Magellan
About to Die
Gun Has No Trigger
See What She Seeing
The Socialites
Offspring Are Blank
No Intention
Beautiful Mother
Dance For You
Just From Chevron
Maybe That Was It
Useful Chamber
Unto Caesar
Encore:
Stillness Is The Move
Cannibal Resource
Impregnable Question
—