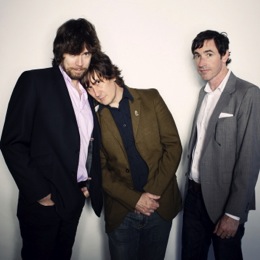 If you were one of those people who actually kept watching Weeds after Mary Louise Parker got knocked by up a Mexican drug lord, you would know that they stopped using “Little Boxes” for the theme song a while ago. In seasons two and three, the old Melvina Reynolds song was covered by a long list of bands in the opening credits, and it was pretty neat! But then they stopped doing it, and the older brother started dating one of the Olsen twins, and there went my interest in the show.

The Showtime series is now in its eighth and final season, and have brought back “Little Boxes” as its theme song, and will continue to have the tune covered by a collection of bands.

Ben Folds, The Bronx, and a duet of Steve Martin & Kevin Nealon have all performed their versions of “Little Boxes” this season, and last night The Mountain Goats featuring Midtown Dickens offered their take. A cheeky song about middle-class assimilation fits snugly John Darnielle’s ouevre. Check out the song below.