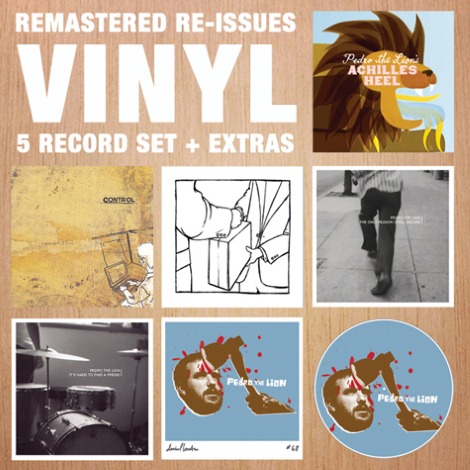 It’s been six years since the members of Seattle indie rock outfit Pedro the Lion went their separate ways. Now, Jade Tree Records is giving fans a chance to revisit the band’s decade-long career by reissuing four LPs and an EP on freshly minted vinyl.

Included amongst the repressings are all four of Pedro the Lion’s full-length albums: their 1998 Made In Mexico debut It’s Hard to Find a Friend, as well as their three Jade Tree releases, Winners Never Quit, Control, and Achilles Heel. The 1999 EP The Only Reason I Feel Secure rounds out the collection. All the vinyls feature remastered audio from the original source by the band’s multi-instrumentalist T.W. Walsh, except for Winners Never Quit, which was handled by John McCaig.

All five records will hit retailers on October 30th, but a pre-sale will be held from now until August 31st. Those who opt to order the complete collection early will get a screen printed turntable mat and a signed and numbered 10×10 art print, both adorned with the lovely image above of lead singer David Bazan’s head being split open by a hatchet.

For more information and to pre-order your choice of the albums (at $14 each) or the bundle with the head-splitting imagery ($70), click over to Jade Tree’s online store. Below, listen to the track “Never Leave a Job Half Done” from Winners Never Quit.