Foxygen – Take the Kids Off Broadway 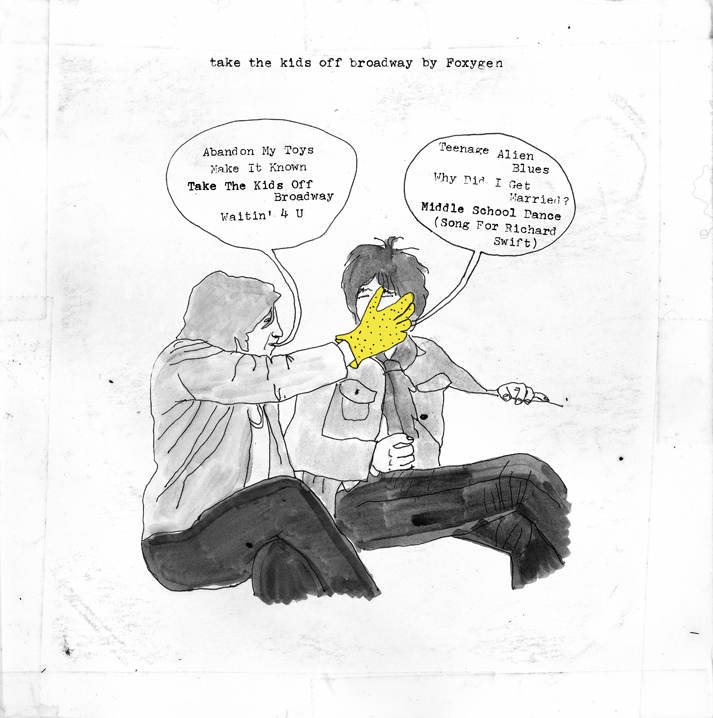 Alone, Sam France and Jonathan Rado are just a couple of 22-year-olds with dense record collections and cute faces. Together, they’re Foxygen—purveyors of throwback psych-pop. Last year, they converted a New York City bedroom into a makeshift studio and recorded Take the Kids Off Broadway on four-tracks. Then they signed to Jagjaguwar, which describes the duo as “the raw, de-Wes Andersonization of The Rolling Stones, Kinks, Velvets, Bowie, etc. that a whole mess of young people desperately need.”

Those ‘60s influences course through Foxygen’s music, but Take the Kids Off Broadway is idiosyncratic. None of these songs fit any previously established songwriting structure. Opening track “Abandon My Toys” quivers uncomfortably with fluctuating tempos and a Ziggy Stardust glow. Every time France latches onto a vocal hook, the instrumentation spasms and convulses and the song falls apart. “Make It Known” attempts to restrain those spasms with chilled-out arrangement of organ and horns. Crooning like an adolescent Eric Burdon, France pleads during the chorus, “I’m willing to change, I’m willing to change.”

Foxygen’s spontaneity is refreshing. France and Rado sound like they’re having fun together, letting their instruments lead the way and singing along when it’s appropriate. The rollicking “Waitin’ 4 U” exemplifies this, as France mimics Mick Jagger’s vocal delivery with scary accuracy. Take the Kids Off Broadway lags only when Foxygen begins meandering. The ten-minute “Teenage Alien Blues” bogs down the record’s latter half with goofball noise experiments that should’ve never left the demo tape, and the dawdling “Why Did I Get Married?” also fails to live up to its cool title. Fortunately, Foxygen end the album with the infectious “Middle School Dance”, a piano ballad that descends into a noisy freak-out and France reciting a monologue: “I’ve learned how to be a man, how to not walk around with my head in the sand.”

Take the Kids Off Broadway is homemade, but it isn’t half-baked. And the fact that France and Rado live on separate ends of the country (Olympia, WA and NYC, respectively) makes this LP that much more endearing. It’s got that first-take impulsiveness to it, full of tics and eccentricities, and that lack of pretention lets us see Foxygen as the characters they truly are.