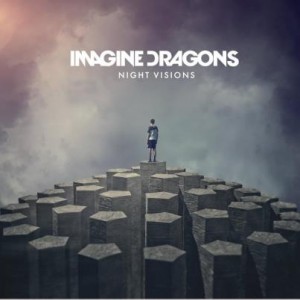 If you had bounced and jumped around to Imagine Dragon’s chorus in “It’s Time”, you would also wait with so much excitement for the band’s first full-length album. It’s a shame that Night Visions fails to match the fresh adrenaline rush that the band’s first single had promised us when we first heard it on the radio or in commercials earlier this year. We’ve heard more crisp songs from them before.

After sneaking into the airwaves and into our summer playlists through a handful of hopeful EPs, Imagine Dragons struggles to validate its hype with Night Visions. The full-length LP gives us 11  tracks from Las Vegas band, a handful of which have already been released on previous EPs but with various studio tweaks. Those that have stood out in previous releases — “Demons” and “On Top Of The World” — are still the only ones that give Night Visions any sort of crunch and edge. Tracks like “Hear Me” are full in sound, but they’re forgettable because they’ve been penned many times before by the glamorous arena rock outfits that sell out stadiums and don magazine spreads.

The record is ornamental in style and trite in message. “It’s Time” has become a successful hit partly because of its peculiar use of the mandolin to uplift what would otherwise be a song built on a conventional verse-chorus-verse backbone, but tracks like “Every Night” are too predictable with the big drums, the reverberating claps, and the upbeat piano slams. It’s not that the rock recipe doesn’t work, but there are often rewards for lively acts such as Imagine Dragons when they stray away from stirring together the formulaic ingredients for a radio-friendly tune.

The recycled sounds of big stadium rock don’t lose popularity throughout generations, which is why Imagine Dragons can still swoon and capture with a record like Night Visions. No doubt, the tracks are radio-friendly in all its grandiose manner, friendly choruses, and versatile stylistic differences ranging from hip-hop to folk to pop. Being surrounded by the attention of reputable producers and recorders helps make an album like Night Visions find its place on the charts. But leave room for the twinge of disappointment that comes from the lack of that Imagine Dragons edge that made them stand out in previously heard singles.