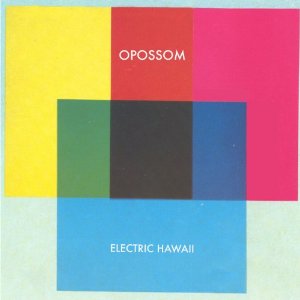 While Nielson’s work in Mint Chicks (which also featured his brother Ruban) classified itself as “troublegum,” there’s nothing difficult about his work as Opossom. The shimmering waves of melody wash over easily, minor alterations to the expected formula producing ripples of excitement in their midst. The stuttered chorus of “Getaway Tonight” and the vocoded backing vocals of “Watchful Eye” crop up unexpectedly, yet never distract from the pure pop construction.

The swinging fun of “Why Why” is another high point, rich harmonies followed by what sounds like bongos, pitch-shifted guitar twirls, and even a couple of horn stabs. The smacks of smoky, gong-like guitar on “Cola Elixir” and the female harmonies (courtesy of Bic Runga), streaking guitars, and rubbery bass of “Fly” strike from equally powerful, yet disparate, classic pop worlds. These tracks hit their nostalgic genre marks, yet their fresh energy, quirky choices, and undeniable hooks make this anything but retro. Moreover, despite the constantly shifting tones, there are no seams, a sparkling, dreamy power superseding any and all genre flourishes.

The buzzing goodness of Electric Hawaii radiates from lead single “Blue Meanies”, a track that (like much of the album) plays like a blissed-out version of the material Wavves put out on King of the Beach. The pure bubblegum joy on Opossom’s debut is cavity-inducing, staggering, but the ingenuity and vision are equally powerful. The speaker-blowing noise interlude of album closer “Inhaler Song” is cleverly placed, careening the listener out of the world that Nielson creates, providing a sense of closure and tension to an album that thrives in its intricate, masterful organization.

Essential Tracks: “Why Why”, “Getaway Tonight”, and “Blue Meanies”