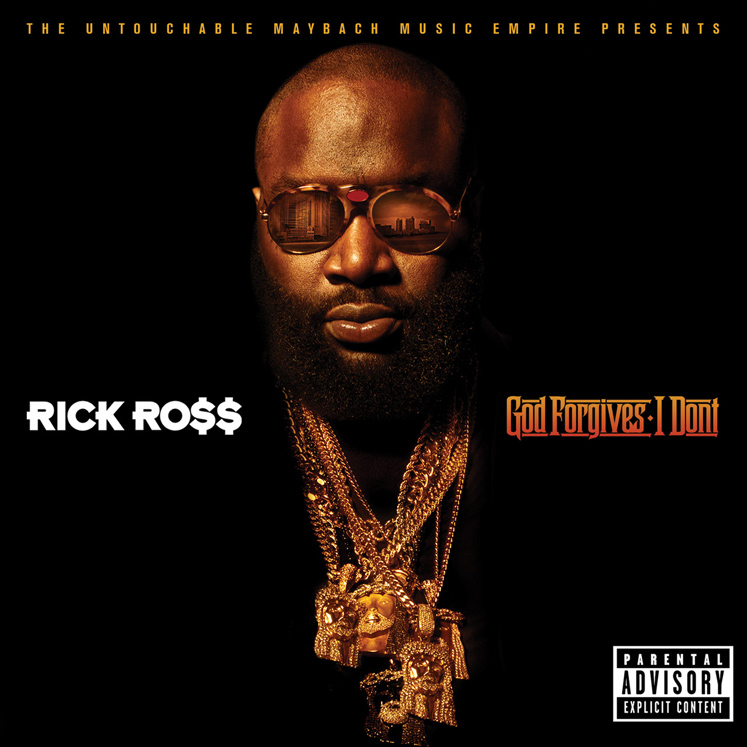 Devin Friedman’s GQ profile of Rick Ross last October provided a vivid window into the Miami rapper’s outrageously gaudy life. Among the expected biographical passages and descriptions of Ross’s predictably bottomless appetite, Friedman also recorded these amazing quotes wherein Rozay just hums about experiences neither you nor I could imagine partaking in. Here’s how he describes his first trip to the Cannes Film Festival: “Took the team over, ended up fucking around, getting some Ferraris, Lamborghinis, going to the Eden Rock, kicking it with a few homeys. Shout-out to Leonardo DiCaprio.”

For Ross, music has always been a way to attain and then boast about fantasies like those. As he raps on “Pirates”, the second track on his latest album, God Forgives, I Don’t, “Dreams of getting cream and never to be extorted/ Seen so many things, be preposterous not to record it.”

What makes God Forgives a more interesting record than Ross’ four previous efforts (Port of Miami, Trilla, Deeper Than Rap, and Teflon Don) is how he talks about those things. God Forgives was originally planned to be released last December, but Ross had at least three well-publicized seizures in October and the album wound up being delayed until now. And likely because of those seizures, which were purported to actually have been life-threatening, God Forgives adds fascinating realism and reflection to Ross’ usual over-the-top gusto. Suffice it to say that the way he says something like “If I die today” here sounds different than it did on Teflon’s “I’m Not a Star”.

There’s still plenty of fun and brags, though. Because of all the five- and six-syllable one-liners he’s heaved out over the years, Rozay’s picked up a near-unrivaled sense of brevity; he puts more imagination into single couplets than most rappers do into entire verses. From “Sixteen”: “Rolling like Mick Jagger, the women just get badder/ All I see is the money, Cream, Eric Clapton.” Here’s “Amsterdam”: “I’m laughing at people who labeled me poor/ Now I piss on Europeans, you’d think it was porn.” There’s no reason to think Rozay doesn’t realize how ridiculous some of those lines are, but he also realizes they’re awesome. And they are awesome.

But then, there’s that lurking self-conscious side to GFID; Ross might still rap like he’s invincible, but those seizures made him realize he isn’t. On “911”,  when he does some frothing about importing coke from South America, the thought of death is fixed in the back of his mind: “If I die today on the highway to heaven/ Can I let my top down in my 911?”. On “Pirates”, he confides, “At this point in my life, I’m just tryna survive.” And on “Ice Cold”, he says he’s “running away from my obituary,” but it instead sounds like he’s confronting it. It’s hard to put a finger on exactly why or how, but GFID is surely one of the most lyrically interesting major-label rap albums in recent memory, up there with Graduation, My Beautiful Dark Twisted Fantasy, and Take Care.

Musically, GFID further supports the idea that the big-name producers of today are more adventurous and polished than the big-name producers of yesteryear. Nothing here blares like Teflon’s “B.M.F.” or “MC Hammer”, but G5Kid’s “Hold Me Back” and The Beat Bully’s “So Sophisticated” are doubtless cousins of those Lex Luger-produced thunders. The André 3000-featuring “Sixteen” is eight minutes of some of the silkiest horns and strings to ever make it onto a rap album. And there’s also the nuance of the beats, exemplified by things like the spiraling guitars on “Maybach Music IV” and the slicing sax on “Ten Jesus Pieces”. For a rap album, GFID sure has a lot in common with late-‘60s/early-‘70s records like Isaac Hayes’s Hot Buttered Soul and Curtis Mayfield.

With all these layered components, God Forgives is a deep record that trips listeners on each listen. Save for a few duds (e.g. “Three Kings”, “Touch’n You”, and Three Stacks’ solo on “Sixteen”), the album stands out as one of the most well-constructed rap records of the year. Ross’ first four albums depicted him as egocentric, obsessed with his riches and power and even more obsessed with telling you about it all. The same could be said about God Forgives, but it’s also important to notice the subtle changes in Ross’ demeanor. With its share of both musical indulgence and serious self-reflection, it’s an album as big and sturdy as the man behind it.