How to Play a Music Festival 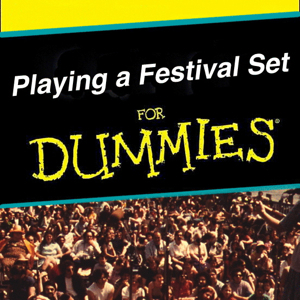 There’s that awful moment where you look in your gym bag and realize you forgot your portable music player on the coffee table, and so as opposed to playing your “NEW GYM PLAYLIST 2” you just made, you’re forced to listen to LAZER 103 FM through the gym’s speakers with Disturbed or Sevendust or Taproot or Drowning Pool songs echoing off the glistening lats and delts of all the body-builders. I’m miffed because I don’t like forgetting things, but I really don’t mind schlock metal on the rare occasion I’m actually at the gym. Acquiescing to the mindset of gym-music is liberating. Expectations are different (I don’t expect to hear Bon Iver), desires are different (I don’t want to hear Bon Iver), the collateral effect of music is different (Bon Iver is not going to make me push it to the limit) and the environment is different (The body-builders could care less about “lapping lakes like leery loons”). In gym — in that paradigm — I really want to hear is Chevelle’s “Send the Pain Below”.

At a music festival, I really want to hear a band do a cover of a song I know. I want to see a band be bigger than who they actually are, and fall into the spirit of the festival. I want to see more crowd-hyping than I normally would care for, and I want to see every band hop down and sing to the front row and then crowd surf because that’s something no one ever gets sick of. There’s hundreds of thousands of people gathered in an outdoor arena, wearing chartreuse tank tops and banana suits, smoking weed under a tree, angling to get a giant bite of a pork sandwich while not spilling a beer. This isn’t you with your headphones on your couch, or at a party, or at a rock club. Young bands might want to start thinking about what kind of hedonistic, primal place a festival really is and fall into that paradigm — to take advantage of the different environment and show how versatile of a band you can actually be.

After years of attending some giant fests, here are some of our favorite tips for success at a music festival. The best things happen when a band forgets their iPod at home and just rolls with it.

Tip #2: Even better, cover an act that’s not around anymore

In addition to the benefits of a standard cover, you’re providing a unique live experience. I will never get to see the Replacements– so the next best thing is seeing someone else play their songs. Ditto for Nirvana, the Beatles, etc.

Even if you don’t know the Flaming Lips at all, you want to see Wayne Coyne do the human hamster-ball thing.

What makes you think that? Ohhh, you’ve really never seen The Flaming Lips.

Tip #4: Get the crowd into new material early

There’s no time to lose when it comes to a festival set, which routinely sees bands having their sets truncated to less than an hour. If you’re showcasing a new or yet-to-be released album, don’t waste time. Pick your strongest new song and get at it!

What makes you think that? Bloc Party’s set at Osheaga Festival 2012.

Until DJ tents can block out all light or we invent crazy sunglasses technology, unless you’ve got a hologram or giant hamster ball, don’t waste your time or effort perfecting the light show for that early morning set.

What makes you think that? Every DJ set that’s ever been scheduled before sundown.

Maybe you’re facing a skeptical audience, or at least one that isn’t your natural crowd? Hit them early!

What makes you think that? Jay-Z’s performance of “Wonderwall” at Glastonbury 2008. After Noel Gallagher said hip hop doesn’t belong at a festival, that little performance was a nice wry counter.

What better way to give the crowd a live show that’s something to experience, rather than just witness, by jumping into a pit of frenzied fans?

What makes you think that? St. Vincent during “Krokodil” at Sasquatch!, Bonnaroo, Coachella, etc. Or, Alice Glass at every gig ever.

Everyone loves a baby — even political candidates kiss them for photos. Serenade a tiny human in public, and you’ll give every gal in the audience a tingle in her ovaries.

What makes you think that? The National’s Matt Berninger. He won the hearts of every soul at Lollapalooza in 2010 when he edited the famously profane lyrics of “Mr. November” and sang the cleaned-up version directly to a little girl in the audience.

Everyone loves leaving the show with some new shwag to show off to their friends, especially those that didn’t make the trip. Whether you use a t-shirt cannon or a simple toss from the stage, reward those that spent all day in the sun to get close to you.

What makes you think that? DJ Godfather tossed out his new LP to half of his crowd at Movement Detroit 2012.

Live music can be a treat for the eyes as well as the ears (and soul). Visuals grab the attention of punters at the back of a massive crowd and creatively accompany the music itself.

What makes you think that? Daft Punk’s pyramid. Nuff said.

Congratulations. You landed a gig at a big festival, along with many of your fellow friends in the scene. Seize the opportunity to have some fun together and give the fans something special that they won’t get the chance to see on the rest of the tour.

What makes you think that? Too many moments to name, but Glastonbury is full of these: Muse featuring The Edge, Scissor Sisters with Kylie Minogue, Emmy the Great joined by Tim Wheeler for a cover of “Where Is My Mind”, Beyonce featuring Tricky on “Baby Boy”, Jarvis Cocker alongside at Spinal Tap and Shlomo.

You need to be prepared in the event that things don’t go quite according to plan. A few jokes and a playful attitude onstage can go a long way toward making for a memorable festival set.

What makes you think that? Cedric Bixler-Zavala, who handled At The Drive-In’s recent technical difficulties at Lollapalooza 2012 with style.

Just as the types of festivals and their respective experiences fall along a wide spectrum, so too do the festival-goers that attend them. From an acid-washed daze of nomadic musical irreverence to thoughtfully planned, set-in-stone festival itineraries, they’re all over the map. The latter group though, the tightly-wound music fanatics who come to see the bands they want to see and pretty much nothing else, do not take kindly to any sort of hiccup in their otherwise perfectly planned experience–one that probably didn’t come before some tears and bitter acceptance of the various scheduling conflicts they’d have to circumscribe or simply erase from their memories. When you show up late, prepare to face the consequences– and the irrevocable backlash of the disappointed.

What makes you think that? Two words: FUCK KANYE.

A surprise acoustic set in a setting other than onstage is a unique experience which binds you with your fans– and makes for a fun viral video to be shared later.

What makes you think that? Jack White’s a solid example. But Glastonbury’s Strummerville area always provides a campfire stage that features some unannounced surprises every year, such as Emmy the Great, Mumford & Sons, etc.

Stage banter, props, and visuals are all great, but don’t let the frills cut into the real reason why you’re at the festival: Fans (both new and old) want to hear you perform. Festival sets are short, sometimes allowing for less than a dozen songs, so work the new material, cue the classics, and make sure people leave talking about the performance and not about the excess time spent sound checking or pushing drunken dialogue on the crowd.

What makes you think that? Crystal Castles. Take note of their performance at Reading Festival 2009.