by Jeremy D. Larson and adamkivel 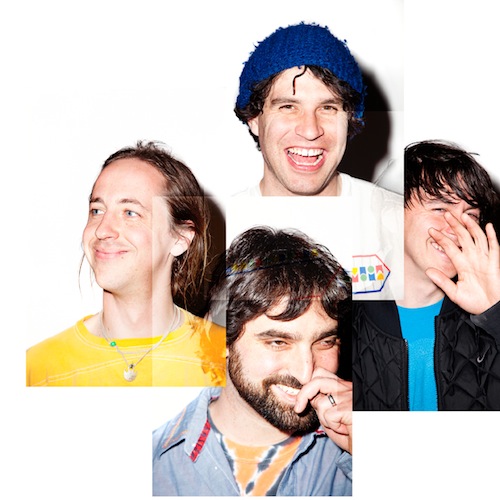 Sunday night, we were offered a very unique experience at the culmination of the weekly Animal Collective Radio broadcast supporting their latest LP Centipede Hz. The four members have each been taking turns curating a radio show, inviting guests like Atlas Sound and Black Dice to share mixes and remixes, premiering songs, all whetting the palate for the final show where AnCo would stream their album in full.

But before that, AnCo member Geologist shared an hour-long mix the he created:

“My show is actually a version of a mix I made for Ben Allen (Centipede Hz Producer) before we went into the studio.  He asked us for a list of songs that we might reference in terms of sound and vibe so he could understand how we wanted the album to sound.  We put together a list of songs that either encompassed the overall sound and vibe, or just had specific things we liked, such as drums sounds, or vocal effects.  Rather than just send him each song, I thought it’d be fun to make transitions in between each track and sequence it out into 4 separate continuous hypothetical LP sides, which is what we were thinking for the sequencing of our album. For the final show of AC Radio we thought it’d be cool to play this inspirational mix and the album back to back.”

There’s a real sweet spot in conversations about music — a sliding zone somewhere between the context of an album and how an album makes you feel. Throughout AnCo’s storied career evolution, most of my conversations have been what their songs evoke rather than trying to articulate their musical taxonomic rank. Geologist’s mix slides the sweet spot more towards the middle giving not just Centipede Hz some classification and relation to the world music, but now the whole of Animal Collective’s work seems to have a greater context.

It helps connect the dots to their avant garde sound and root their music in various decades and worldly locations, from obscure Japan psych-rock to Turkish political folk, to Peruvian Chicha music, all the way to more common signposts such as Pink Floyd and Portishead. I am admittedly really bad at dealing with the statement ”I don’t get this band” — my response is usually something like, “Just die already” — but if you’ve ever heard someone say that Animal Collective is something they just don’t get, here’s some background on all songs Geologist played on the mix, and where they might tie in to Centipede Hz.

You can stream Geologist’s mix below, or take a listen to it in a separate window at Mixcloud.

(Note: We decided to omit all of the transitions between the songs, which while just as important to the full songs played on the mix, would warrant their own feature altogether focusing on avant noise, library music, and modern classical. Let’s go with three key artists to definitely check out: The Focus Group, Tim Hodgkinson, and Christian Marclay).