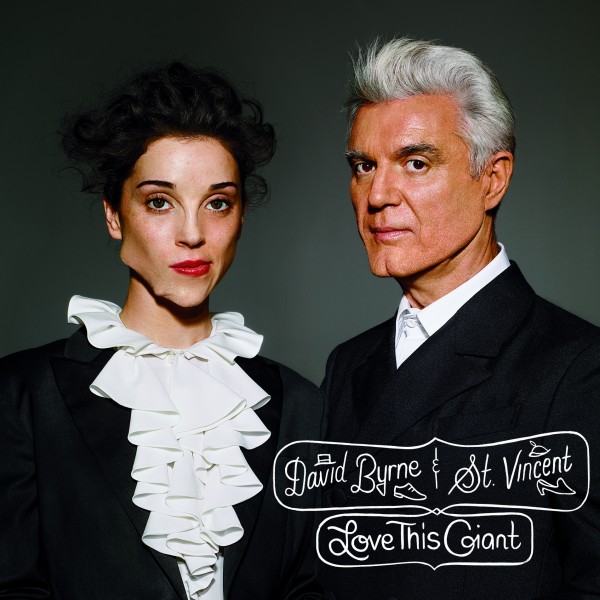 Twenty-six years ago, David Byrne stood from the silver screen in True Stories and asked, “What time is it? No time to look back.” It’s a short mantra that goes a long way in describing the 60-year-old songwriter, whose celebrated canon of work runs parallel to no one. Whether amid the Talking Heads or alongside collaborators like Brian Eno, Byrne exhibits this pioneering attitude that’s uncanny yet exigent. He’s a creative steam engine that’s always moving on a track that never ends. It’s something any potential collaborator has to respect, and his latest does.

In a recent interview with Pitchfork, Annie Clark discussed Byrne’s ethos, stating: “David never seems to be suffering from a dearth of creative energy. It takes many forms, but he doesn’t seem to be a nostalgic person. He always wants to be moving forward. That’s inspiring.” It’s fitting then that the two would come together on Love This Giant. Similar to Byrne, Clark has paraded through a number of collaborations (Sufjan Stevens, The Polyphonic Spree), though she’s always apt to move along. And as St. Vincent, she’s become a scientist to innovation. Last year’s Strange Mercy pushed the boundaries of a traditional female singer-songwriter both lyrically and musically with a rolodex of timely themes and an arsenal of sounds that turned the heads of critics and composers.

Byrne is no stranger to this and commended her work in the same interview, stating: “We both sometimes think of music in terms of riddle and form, like a puzzle to be figured out in terms of construction.” Though Clark argued that Byrne’s more capable at finding the right pieces, she was merely acting modest beneath a tall shadow. Her work that threads through the ambrosial orchestration of Love This Giant at times represents the clutch edges and jagged fragments. Her hypnotic vocals do si do over a rush of brass pumps on “Weekend in the Dust” then later monotonously support Byrne’s lyrical charges on “Lazarus”. The latter comes wired with Clark’s menacing guitar work that swings between bubbly punk and gritty New Wave.

Yet the album’s opening track, “Who”, is rather collusive. It leads listeners to believe in a starstruck marriage between the two talents. Instead, it’s more akin to a divorce, something that was harmonious and entwined, only to become reflective and disparate. Byrne and Clark don’t exchange rings here, they share a house with separate rooms, occasionally crossing paths in the kitchen or living area. There are occasional snapshots with the two together — Byrne’s lovelorn ballad, “Outside Of Space And Time”; the Dap-Kings and Antibalas-supported island opus “The One Who Broke Your Heart”; and the lunging existential thunder of ”I Am An Ape” — but it’s more of a momentary thing.

That’s one of the album’s strongest suits. It’s as if they’re haunting one another and that’s not too far from the truth. Similar to Byrne’s second successful collaboration with Brian Eno, 2008’s Everything That Happens Will Happen Today, he and Clark wrote most of these songs by trading its early constructs online. So, even when one song sounds like it belongs to either party (e.g. “Ice Age” exudes pungent aromas of Strange Mercy), it’s really working off their newly minted DNA. Listen long enough and you’ll hear the genes surface in each track. When Clark’s reflecting about being the “Optimist”, there’s this aquatic underbelly and sentimental wash that echoes Byrne’s handiwork on 2004’s Grown Backwards. Earlier, as Byrne sets the table on “Dinner for Two”, not only does Clark tail him with harmonies, but so does a layer of guitar hooks straight out of 2007’s Marry Me.

There’s also a beautiful sense of timing here. Arguably, Love This Giant can be construed as a follow up for either party. The thing is both of their previous efforts are some of their strongest works to date. So, not only are they in their prime (which, technically, doesn’t really apply to a longtime veteran like Byrne), but they’re successfully pushing themselves past that point. Byrne’s paranoid social commentary on “I Should Watch TV” feels like a damning confession that picks up where 2008’s “I Feel My Stuff” left off on Everything That Happens.... “The more I lost myself, the more it set me free,” he sings in one beat, then later screeches, “Touch me and feel my pain.” The stormy rhythms and claustrophobic shades offer this thwarting mass of sound, and it can’t be coincidence that they just happen to echo Clark’s warbled visions in Mercy‘s “Northern Lights”. In turn, it’s less a collaboration and more a tutoring session on how new tricks can sharpen old perfection.

But really, it’s the album’s bucolic brass section that keeps this collaboration sententious — or, as Byrne also told Pitchfork, “something that’s not an Annie record and not a David record.” Granted, the two are no strangers to a horn section, but they’ve never given such credence to one, or at least this pronounced. They allow the horns to create a foundation for their extensive layers of baroque pop, which only elevates their tracks to something soulfully extraterrestrial or dark deco.

It’s one hell of a story: Two pioneers looking ahead into the future with an ornate brass section. Then again, so is a project with the names David Byrne and St. Vincent attached to it. The good news is that both lead to favorable endings.

Essential Tracks: “I Should Watch TV”, “I Am An Ape”, and “The One Who Broke Your Heart”