Lewis Black – In God We Rust 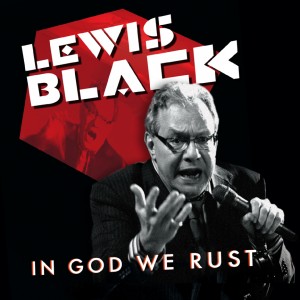 Too many know Lewis Black for being loud. His followers, however, recognize him as a purveyor of fine truths. Influenced by Carlin’s reckless introspection and Hicks’ riotous demeanor, Black paved a scorched path with 2000’s The White Album and expanded it to four lanes under the Bush administration. As contributor for The Daily Show, specifically with his Back in Black segment, the eccentric Jewish comic offered a brusk mental escape for liberals and bitter conservatives everywhere. He exuded common sense in an era that had very little.

On his latest album, In God We Rust, Black acknowledges that the world’s still stupid, but this time around, his hyperboles and tantrums feel a tad crotchety. The majority of his material here digresses on society’s rampant use of technology, specifically apps, the iPhone, Facebook, and Farmville. “If you don’t know what an app or an application is,” he preaches, “when you get home tonight, I want you to get down on your hands and knees, and thank whatever god you pray to…” It’s all played out in his signature histrionic way — and he’s not always wrong, especially about Farmville — but there’s just something out of touch about it all.

“I am old,” he contends. “I used to think it had to do with the calendar — it doesn’t. It’s something you know, it’s something that happens.” It’s almost as if he’s too self-aware at this point in his life, which remarkably was always one of his strengths — after all, he essentially broke into the circuit amidst his fifties. Yet these diatribes and damning protests against something as necessary as technology feel pedantic, uninspiring, and borderline ignorant.

In some respects, that aging self-awareness still works to his advantage. When he storms through a tirade on the Tea Party, he’s as wise as he is insightful: “It’s amazing that they have convinced a group of people to bust out of their double wides, dressed as Ben Franklin, holding a kite in one hand and a key in the other, screaming, ‘Don’t tax the rich!'” He pauses, again keeping the theatrics up. Then, he punches hard: “If a group of people, leaders, can convince a group of folks, who barely have a pot to piss in, that the rich shouldn’t be taxed, that is leadership.”

In God We Rust wants to be a declaration on what’s wrong today. Instead, it innately represents the problem itself: the struggle between those for tomorrow and the few for yesterday. It’s no fault to Black, and again he’s not alone in his sentiments, but altogether it’s just not as sharp as it could be. When he’s on, he’s fiery and menacing with “truthiness,” but when he’s off, he almost becomes a parody of himself. In that light, the album’s title rings cautionary and that’s just a shame.