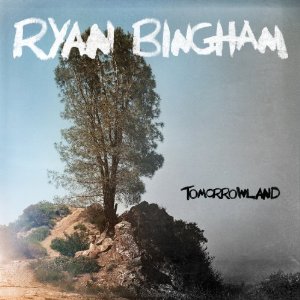 For his new album, Tomorrowland, Ryan Bingham ditched his label and his band. He’s also ditched the hard-worn sensitivity of “The Weary Kind,” his breakthrough Oscar-winning song penned for Crazy Heart. This time around, Bingham, like some kind of commercial for the authenticity-craving Americana fanbase, embraces a louder, more aggressive sound that leans more towards rock than country.

Tomorrowland, the first record Bingham recorded on his own label and has had full creative control of, finds the Texas songwriter shedding his country-leaning sound and arrangements while holding onto his well worn country tropes and themes. This may be due to the absence of The Dead Horses, his longtime backing band, but the results of this new direction can be off-putting. “Guess Who’s Knocking” is more Kid Rock than Kris Kristofferson and sounds like country cock-rock, as Bingham sings in the song’s supposed payoff, “it’s me motherfucker, I’m knocking at the door” over and over.

Mostly, though, Tomorrowland doesn’t grate as much as it excludes. If Bingham now feels free to shed the genre limitations and expectations of Americana-leaning alt-country, he’s also lost his many of his songwriting hooks along the way. “Hallelujah,” from 2010’s Junky Star, was a song sung by a distanced dead man, a man staring down at life wondering why he’s never felt more alive. It’s the type of song most songwriters would give anything to write. The songs here, the stories and sounds, don’t reach out and grab in the way that Bingham’s best songs hook the listener at first listen. If being Lost Highway Records’ hard-traveling, rough-singing outlaw country poster boy was a bit much for Bingham, he’s thrown away the parts that image so appealing and so damn convincing, while holding on to many of its tired cliches.

Bingham is pissed and preaching, yelling about money and hard times. These are well-worn themes for Bingham, one of the few country songwriters insistent on foregrounding class and economics throughout his career, so they don’t sound as forced as they would from nearly any other songwriter. Still, “Rising of The Ghetto” is a bit hard to take, like a call to arms without a clear audience.

Several other songs are nice, standard fare for Bingham. “Flower Bomb” and “Never Far Behind” would fit in nicely on Junky Star, but a few hard-to-take missteps, and a too-long running length of 62 minutes all amount to being Bingham’s weakest album to date. Bingham sings that he’s “forever traveling this road I’m on,” but on Tomorrowland it’s unclear why we should still travel with him.