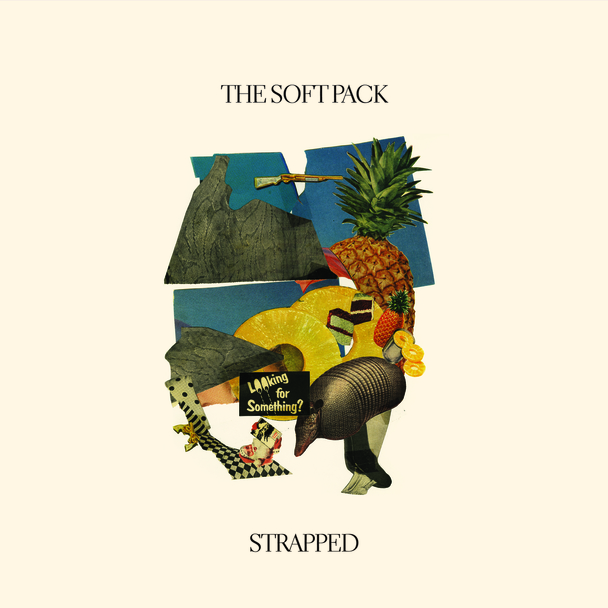 A few weeks back, I watched Amoeba Records’ What’s in My Bag, where musicians share their store purchases, featuring San Diego rockers The Soft Pack. With remarkably similar tastes, the foursome snagged LPs from Funkadelic, R.E.M., Kurt Vile, Mazzy Star, Can, The Doors, and more. What’s surprising about those choices is that there’s not nearly enough of those diverse and intriguing influences present on the band’s 2010 debut self-titled album. Instead, the band unveiled a collection of lo-fi, high-energy songs that painted them as fun-loving slackers. For their sophomore LP, Strapped, the band shift its personal paradigm, infusing elements found in those aforementioned picks for a more varied rock experience.

It may not have been a conscious effort, but the band essentially recreates their debut (specifically jangly anthem standouts “C’mon” and “Answer to Yourself”) with this effort’s first half. “Second Look” hones some of the band’s more manic tendencies, focusing the guitar part into a streamlined shot of pub rock noise. The entire experience is enhanced by the addition of a saxophone, a decision the band will utilize later to add a sheen of maturity and unpredictability to the fray. Speaking of growth, the band have always presented lyrics with an unlikely sense of adult-like balance and purpose. “Second Look” takes that even further, exploring the downside of growing up with especially acerbic wit (“when you found yourself you were short and small/ now you find yourself, it has grown big and tall/ but you find your mind, you can’t expand no more/ and you find your mind, you cannot handle more”).

Where “Second Look” offers straightforward expansion, the band utilizes the old Kansas City Shuffle with “Tallboy”. It’d be easy to get caught up in the flimsy, overly self-deprecating message of giving up and washing away inadequacies with the power of booze (“I fear I need a T-A-L-L-B-O-Why should I try?”). Yet while that appears to be the unfortunately-juvenile high of the songs, there are little undertones to indicate something more: the sweeping horn section, the Nugget-era key part, and a performance from frontman Matt Lamkin where his overly cool, emotionally detached vocals finally feel deliberate. They’re not huge, but they are impactful enough to inject devastating nuance into the band’s catalog.

Linear evolution is great and all, but no sophomore LP would be complete without a few curveballs. On the subtle end of the spectrum, “Ray’s Mistake” is the band’s standard sound infused with bits and pieces of blues and zydeco, adding a much-needed sense of regret and concern (albeit countrified) to their sometimes too-cool-to-care attitude. Moving up the intensity level by leaps and bounds, “Oxford Ave.” is decidedly more serious, a prog-leaning instrumental number that fills its short two-minute existence with layers of snarling horns, smooth surf-jazz guitar, and plenty of dissonant feedback, all with a distinctly Gang of Four lean to it.

Though less intense than its compatriots, “Bobby Brown” deserves special attention as the wackiest of the bunch. Channeling the spirit of the title singer’s work in New Edition, the band torque their sound to ’90s R&B proportions, complete with a warm, vintage synth forged in the fires of Full Force’s dungeon, and lyrics with the charming depth of a 15-year-old boy (“When you see a friend act a fool/ send your friend right back to school/ if you wish he’d rise above/ in the ways of love”). While these cuts feel more gimmicky and less meaningful (though they are terribly fun), their place on the LP is crucial: aware of their debut’s monotony, the band’s doing its best to diversify, with fairly positive results.

For all the rewriting of history early on, the album’s second half still sees the band struggling with its own musical development. In a way, portions of the latter half are clearly the band dealing with some trepidation by attempting to return to their simpler roots. And return they do, presenting a string of cuts that feel flat and uninspired, mere derivatives of The Soft Pack deep cuts. With its weepy guitars and extra enthusiastic slacker-dom, “Bound To Fail” takes the band’s witty self-deprecation and melts it down to its most annoying. “Head on Ice” adds a hazy, dream pop quality to their raucous surf noise, but it feels too stifled. Alternately, “Everything I Know” finds its mid-’70s Santana vibe (sweltering Latin guitar, cheesy sax part, etc.) suffering from a purposeful limitation, a truly underhanded and unsavory tactic.

Forget the sophomore slump (even though they simultaneously overcome and fall prey to that dreaded scourge): this is a band battling their own sensibilities, pushing musical boundaries while hoping to remain intact. They may still be a work in progress, but that progress thus far is demonstrative of an increasingly innovative band, one working too hard to slump.