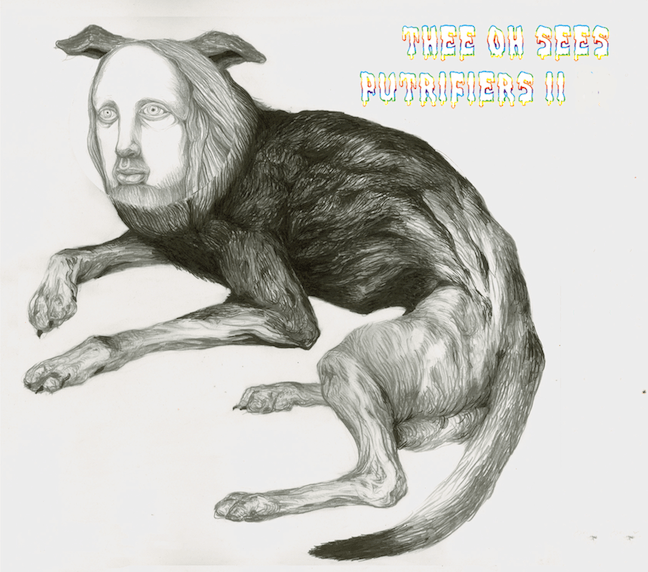 With over a dozen albums notched on Thee Oh Sees’ belt alone — the contents of which range from shambolic folk, to dreamy retro pop, eerily smoke-drenched psychedelic rock  — it’s totally understandable that frontman John Dwyer might start to get a little scattered. Perhaps that’s why he’s named the new Thee Oh Sees album Putrifiers II without there ever having been a first Putrifiers. Though, it’s also entirely possible that the prolific San Franciscan did release an album by that name and it got lost in the deluge of 7″s and LPs released under Dwyer’s name, gathering dust behind the shelf of all of his own recordings. Either way, the sequel fearlessly aims to be everything on that cramped shelf at once, a sampler of the nearly un-sampleable, a primer for a group that has, at points in their career, seemingly done every type of rock well.

While hailing from San Fransisco inherently places Dwyer and Co. into the psych-garage rock scene, Thee Oh Sees have a way of finding themselves just next to normal. The tightly webbed collaboration and friendships in that world are one thing, but their ADHD genre-hopscotching dances away from the traditional curve. When Ty Segall and The Fresh & Onlys are putting out tunes that echo ’60s pop glory days, Thee Oh Sees are discovering their hard-charging kraut knack on Carrion Crawler/The Dream. Now, a year later, as the scene grows in prominence and bands cement themselves into the larger consciousness with lean pop gems, Thee Oh Sees produce an album with sprawling intentions and formless clouds of noise. The album ventures out into so many different directions at once that it lacks the gut-punching power of last year’s disc, or the dreamy soupiness of Dog Poison, but it comes close to both in one set.

Putrifiers II can, essentially, act as an introduction to Thee Oh Sees. Dig the chugging bass, bleary falsetto, and simplistic “ba ba ba” chorus of “Flood’s New Light”? Or do you prefer the pitch-perfect Velvet Underground single-chord swirls and violin icicles of “So Nice”? Perhaps the droning spook and rifftastic glory of “Lupine Dominus”? Take your pick, and you’ll be able to find some point in Thee Oh Sees’ catalog that’ll tickle your fancy. The problem of that sort of multi-faceted skill is that it detracts from the spine of the album and leads listeners elsewhere rather than inwards. A greatest hits album could do that just as easily.

That said, this is a brilliant example of what Dwyer and friends can do. Mike Shoun’s easy galloping kitwork and Petey Dammit’s limber bass plucking ground the fuzzy Zombies-balladry of “Will We Be Scared”, letting the frontman add sparks of high-end guitar wherever they seem to fit. The track is the perfect eye to the storm of guitar riffs that surround it, a haze of whispered introspection settling like dust. “Will we be on TV/ we’ll have to wait and see,” he cheekily coos. Album closer “Wicked Park” similarly lets the steam pressure leak out rather than explode, the acoustic strumming and string thrumming allowing Dwyer and Brigid Dawson to hover in Nico coolness, lines like “went to Wicked Park to see a friend made out of dark and say hello” melting away. The motorik insistence of the title track is a cave at the back of the garage, one that will delight in its bassy insistence, but there’s barely enough time to explore it.

There’s nothing on Putrifiers II quite as brash as their last disc (or the crushing live performances thereof), and nothing quite as woodsy as the saw-wobbling days of Thee Hounds of Foggy Notion, but this isn’t a band about presenting a single digestible sound. This album encapsulates the shark-like nature of Dwyer’s songwriting. It’s fun and challenging to try to keep up with him, to explore the myriad little experiences he has in store for you, knowing all along that there’s going to be another bunch together any day now. In this case, Thee Oh Sees have repeated that challenge in a single album. Every track presents a new side of the band in quick succession, like pushing a magic Scan button on a radio and finding a paradoxically coherent choppiness.