Live Review: Einstein on the Beach at Brooklyn Academy of Music (9/19) 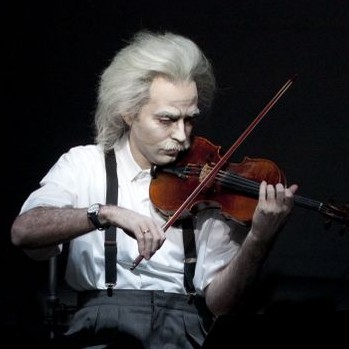 Two things struck me as I stood, awestruck, trying to make sense of the rush of emotion and frenetic brain activity following the four and a half hours of Philip Glass and Robert Wilson’s Einstein on the Beach. One, I have a renewed faith in humanity. Two, there might not be anything more gorgeous than a rectangular bar of white light rotating 90 degrees.

The latter refers to the penultimate scene of the opera, subtitled “Bed”, in which a long horizontal rectangle of crystalline white light moves clockwise until it is perfectly vertical. The scene is empty, the hall pitch black, the music minimal in both melodic and instrumental content. All this following four hours of music and movement that had a way of altering time and space. Of course, part of what Einstein is really all about is time and space.

Einstein on the Beach, in revival through this weekend at the Brooklyn Academy of Music as part of a multi-year world tour, is a mythical work. As a socio-cultural event in 1976, it was a watershed moment of the downtown avant-garde art/music scene, who rented out the Met Opera and showed up en masse for two sold out performances, Warhol in the house of Wagner. Despite only two revivals since its premiere, Einstein remains one of the most important experimental works of art in the late 20th century.

What makes it so important is how the faÃ§ade of myth contradicts with reality. On the surface, Einstein is nonsensical, static, and repeating. In actuality, Einstein is full of meaning, endlessly dynamic, and always changing. Glass takes musical teleology out of the equation; there is no grand recapitulation of themes, no logical conclusion of musical processes. There is only melody, sometimes clear in its singularity and sometimes muddied by layers of polyphonic interplay. It’s always changing, here grouped as three plus five beats, there four plus five, but these minuscule shifts are as perceptible as plate tectonics.

When big changes occur, they become monumental. Perhaps none is more remarkable than during Knee Play 4″, the name given to the entr’actes by Wilson and Glass. Synthesizers and vocals surge in busy, overwrought counterpoint and then fall into gentle madrigal-esque vocals against a delicate violin ostinato. Einstein theorized about relativity, and this may be the closest musical equivalent to the idea that a large amount of energy can come from the tiniest of sources.

Rather than stasis, Einstein is alive with movement. Movement, like music, is only partially goal-oriented; rather, Wilson and choreographer Lucinda Childs revel in a celebration of the body. The gaze typically reserved for soloists in opera and dance becomes diffuse, omni-directional, scanning the stage for hundreds of tiny movements. Like Klee’s twittering machine, there is a constant buzz of motion onstage, even though each performer seems to be repeating their own basic routine.

And while Wilson’s opera is supposedly about Einstein only figuratively and broadly about nothing, it is actually pregnant with meaning. It is about violence, feminism (Charles Williams’ Act I speech on the subject shouldn’t seem as relevant in 2012 as it did in 1976, but unfortunately, it feels particularly of the moment), sex, science, America, pop culture, nuclear war, and finally, love.

One myth that has stuck with Einstein on the Beach is that it’s an opera only by name and the loosest definition: a sung play. Yet in the live performance, there are many aspects to Einstein that are truly operatic. Themes reappear in a leitmotivic fashion: a woman scanning a book with rapid head motions, a solid beam of white light, even the appearance of Einstein himself. There is a tender love duet (the glacial 20-minute “Night Train”), there are chorus scenes, there are ballets, and there are two bona fide showstopper arias–a free jazz tenor sax solo by Andrew Sterman that erupts in paroxysms of sound during Act IV’s “Building” scene, and Hai-Ting Chinn’s chilling, slightly dissonant vocalise to accompany “Bed”.

In the end, no amount of describing the music, the scenery, the dancing, or the texts can match what is the most salient aspect of Einstein live: the experience. The final legend of Einstein is that it’s an apotheosis, a psychedelic journey that begins mundane, even boring, but transcends dimensions to create something horrifically beautiful. With that reputation, I was skeptical whether I would be able to experience the cliched Einstein reaction: mouth agape, emotionally drained, content with the world. Yet after the undistilled overstimulation of the final “Spaceship” scene with its threat of nuclear annihilation, and following the post-apocalyptic idyll of “Knee Play 5”, the promised catharsis was there.