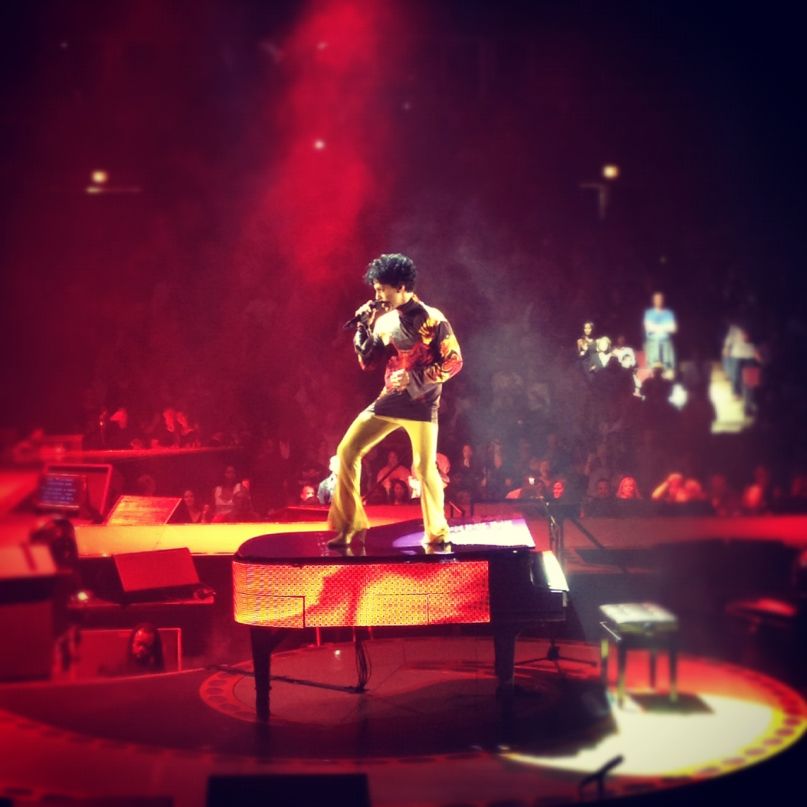 After I skipped some rickety exposition and some shoddy character development, I came into the good part of the movie that was Prince and his Welcome 2 Chicago tour. It was always supposed to be a party, something uplifting for the city of Chicago, as he told TimeOut Chicago in an e-mail interview, Prince wanted to, “PROVIDE A LITTLE RELIEF 4 THE WORKING PEOPLE OF THE CITY, WE THOUGHT IT BEST 2 PUT 2GETHER A SETLIST THAT FEATURED ALOT OF FUN PARTY SONGS AND SOME OLDER CLASSICS BY FAVORITE ARTISTS THAT WERE EASILY RECOGNIZABLE.” [sic, obviously].

Halfway through the set, Prince hushed his band and got on the mic for a mea culpa: “All apologies for all the confusion yesterday. We were still working all the kinks out. I think they’re gone now.” The reviews of Monday night’s show were not all that great. Most said through a veil of backhanded compliments and strained smiles that Prince was “mercurial” and “baffling”, barely ever touching his guitar and opting for more covers, deep cuts, and songs that centered around his brand new funky band rather than his hits.

Last night, Prince started everything half an hour earlier at 8:30 p.m. and rose out of the stage with his Telecaster slung around his back, yellow bellbottoms, silk patterned shirt, and dainty three-inch heels. He soaked in the crowed, slid the guitar around to his chest, and just soloed for a minute above an organ hum. He strutted up to the mic wearing that curled-lip smile, and delivered those special 14 words that define evenings such as this: “Dearly beloved, we are gathered here today 2 get through this thing called life.”

We were at church, and Prince had the whole congregation eating out of his hand. “I got 17 thousand in this place that can testify can’t nobody do u like Prince does,” he intoned before we all gave our own version of “Preach!”. Every minute of his whole sermon was worthy of a “Preach!” I mean, the second song was “1999” which turned the whole place up even more — more of Prince ponying around The Love Symbol stage, more solos, more curled-lips, arms outstretched – welcoming us to his Chicago. Two songs in and it was already perfect. Just perfect. I was elated, out of my body, arms folded behind my head in disbelief at the one-two punch. It was perfect.

But the neat part about watching Prince be perfect is seeing how Prince controls that perfection. A small point to one of the back-up dancers, a quick nod to the bass player to give him a solo, a little wag of a finger to the other guitarist (holy shit how scary that be?), and little pantomime of him playing guitar to the pit and up flew his Telecaster into his arms and seconds later he was bending a blue note over “She’s Always In My Hair”. He mirco-managed everyone on stage, tweaking and adjusting, always with an air of encouragement — not like a Buddy Rich or James Brown intimidation. Prince as a band leader and stage manager is just as fascinating to watch as Prince the guitar player, the dancer, the model, the balladeer, the sex symbol, the total diva.

All of his demure, affected poses and gestures during the R&B power ballads were straight Lauren Bacall performative diva shit, and it was a pleasure to watch. All that commitment to “Sometimes It Snows In April” almost matched the climactic release of  ”Purple Rain”. But even the entire crowd singing along to the wordless outtro of his #1 ballad couldn’t best the two strongest slow jams of the night. “I Could Never Take The Place Of Your Man” was simmered down into a pity-me torch song with Prince just wailing his most iconic guitar solo of the night.

Then, the premiere Chicago diva herself Jennifer Hudson joined Prince for “Nothing Compares 2 U”. Just Hudson’s presence on stage was enough to take your breath away, to say nothing of her pipes. Soul phenom Andy Allo took the lead on a couple of songs earlier in the show, backed by that air-tight horn section Prince has with him now, but she just paled compared to Hudson. Seeing Prince and Hudson sing into each other’s eyes like that — I don’t just still get chills, I still lose my breath.

All of this is to say that, yes, it was perfect. Prince played a perfect show. I have no reservations about saying this. I have no complaints. It was fully realized, all elements coming together and flowing perfectly in and out with a tightly sequenced setlist (see below). Prince sang succinct; from his falsetto coos to his funky screams out of the gut. He also played guitar about 85% of the time, with the exception of a teasing piano medley of “When Doves Cry”, “Hot Thing”, and “Mr. Goodnight”. During “Controversy”, he stroked his guitar lasciviously, and later he went just nuts on “Kiss”. He even played Janet Jackson’s “What Have You Done For Me Lately?” — so what more do you want? His aim is divine perfection, and he worked for more than two and a half hours to do it. Sorry for the hyperbole rocking you.

Four encores couldn’t suffice, and the ultimate finale took place at the House Of Blues. This set, however, was a more free-form, full-funk jam with Prince slinking around stage in a black pea coat, demanding he got it on the 1 (that never gets old, by the way). On Monday, Prince was a no-show for his after-party, but at 12:55 a.m., the curtain opened up and the whole band was there, soon vamping to “Mountains”. It was funny, because this was the kind of set that a no-name band of top-tier jazz cats would play at the House of Blues on any given night, only it was Prince’s band and good God were they on point.

Prince sang along to a covers of “Everyday People”, “The Jam”, and Gary Moore’s “Listen To Your Heartbeat”, mostly letting the band take the reins (I had written down what these songs were on napkins, but an errant beer at the end of the night made quick work of those notes). After a short set break, Prince reemerged saying that he’s going to take it easy on his vocals — so he played bass, spaced out like Bootsy with the phaser and some slap to go along with it.

From what I gathered, this was what he was trying to do at the United Center Monday night, just have a big ol’ party. “Can we do it like we used to do in the ’80s?” he said more than once during the show. It may have fell flat at the United Center, but the whole was dancing to funk and soul music — whooping for drum solos, hollering after soprano sax solos, screaming after a scat solo — like it was the next big thing that’s going to blow up all over the Chicago scene.

Setlist:
Let’s Go Crazy
Delirious (tease)
1999
Shhh
Let’s Work
U Got The Look
Sometimes It Snows In April
People Pleaser
She’s Always In My Hair
Dreamer
I Could Never Take The Place Of Your Man
Take Me With U
Raspberry Beret
Cream
Cool / Don’t Stop ‘Til You Get Enough (Michael Jackson Cover)
Nothing Compares 2 U (with Jennifer Hudson)
Purple Rain
Encore #1:
Controversy
How Come U Don’t Call Me Anymore
Encore #2:
When Doves Cry
Nasty Girl (instrumental)
Sign O’ The Times
Hot Thing
Alphabet St.(instrumental)
Forever In My Life
Darling Nikki (instrumental)
Mr. Goodnight
I Would Die 4 U
Kiss
Encore #3:
Little Red Corvette
Encore 4:
Act Of God
What Have You Done For Me Lately (Janet Jackson cover)
(Theme Song From) Which Way Is Up?
Partyman