Agree, disagree, but the odds are high you worship these tracks as much as we do 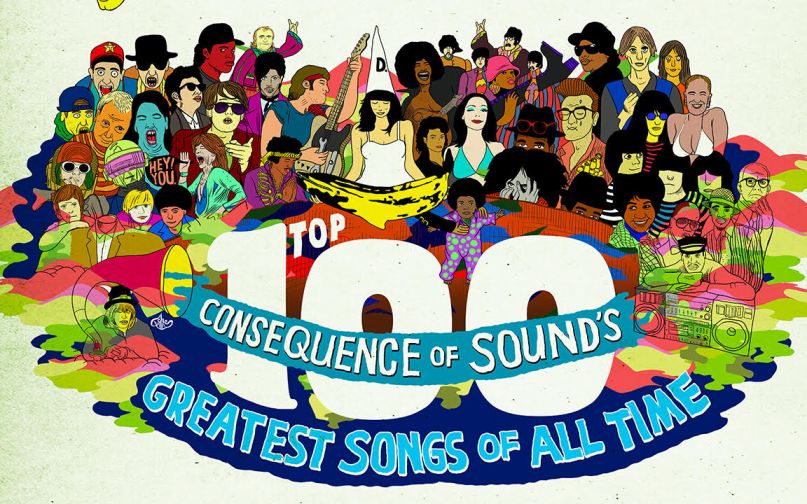 The 100 Greatest Songs of All Time, artwork by Steven Fiche

Everything comes to an end, and so does this project.

As we previously discussed in the first half of this list, the staff of Consequence of Sound assembled in the fall of 2012 to decide upon the 100 greatest songs of all time.

It wasn’t easy, but what really wasn’t easy was this next half. Deciding the top 50, especially the final 10, was a torturous experience, one that nearly split apart the team.

Okay, not really, but who doesn’t love some drama?

Pavement were never dressed for success. On Slanted and Enchanted, they sounded like they haven’t done laundry in years. Even now it’s hard to tell whether ”Summer Babe (Winter Version)” is a ne’er-do-well savant stroke of genius or a calculated masterpiece disguised in ripped acid-washed jeans. But it’s proof that three slack mothefuckers (later joined by Bob Nastanovich and Mark Ibold) who can sorta play their instruments can also write a perfect summer love song.

From Gary Young’s calamity on the set, to Spiral Stairs’ slippy bass riff (played on a guitar run through a bass amp), to S.M.’s overdriven and disconnected solo, “Summer Babe” balances the angular music with a simple song about an estival love in Stockton, CA. Malkmus will wait and wait and wait and wait and wait for that girl with the shiny robes who “stirs her cocktails with a plastic tipped cigar.” More small moments that just add up to so much: Young’s idiotic ideas on how to kick it up a notch on the drums at the end, Malkmus’ laugh on “drop off” in the third verse, and the everybody-now tender climax of “you’re my summer babe.” But success it should have come. -Jeremy D. Larson

Metallica usually put the “b” back in subtle in their early work (“Alcohollica” was their nickname and Metal Up Your Ass was the slated title of their first release, for two) but when your subject matter is the deaf, blind, and mute quadruple-amputee soldier from the 1939 novel Johnny Got His Gun, you got a little more room to run with your metaphors — lyrical or otherwise.

The song’s many sections build off each other, adding more gain and panic with each minute. Hammet even foreshadows his premiere tapping solo with an I-guess-you-could-call-it gentle tapping solo earlier in the song, and that double bass drum riff that Lars Ulrich plays at the top of the final section wasn’t an intentional echoing of the war going on inside of the soldier’s head, but it’s forever a machine gun now.

For the handful of you who haven’t seen VH1’s Behind the Music on Metallica, the times following former bassist Cliff Burton’s death were tumultuous at best, masochistic at worst. The guys purportedly sabotaged the production on …And Justice for All, but its damaged sound fit the damaged band that was making it. “One” apes the compositional forms of former songs like “Fade to Black” and “Welcome Home (Sanitarium)” and borrows from fine literature just like “Call of Ktulu” did, but the unfortunate circumstances around the album and song made for the most fortunate results. –Jeremy D. Larson

Like one of those Phoenixes, Can ascended from the ashes of post-World War II Germany in the ’70s with melodies embodying ambience, sprawling experimentation, and tribal-infused psychedelia. Comprised of the finest classically-trained jazz musicians — Irmin Schmidt and Holger Czukay trained under avant-garde composer Karlheinz Stockhausen — the band formed when Schmidt heard The Velvet Underground on a trip to New York. The frenzied improvisation of “Halleluwah” melts wailing guitar-lines, Jaki Liebezeit’s proto-krautrock  percussion, and vocalist Damo Suzuki’s diaphragm-crunching yelps, murmuring in a dialect that combines Japanese, German, and melodic nonsense. Not quite an angelic praise, Can’s 18-minute piece de résistance is both a demonic and sultry plea, howling for rebirth. -Paula Mejia

Brian Wilson’s mad genius made him the Orson Welles of music, which makes “Good Vibrations” his Citizen Kane. Appending upon Phil Spector’s Wall of Sound production techniques, the song’s composition is a 90-hour patchwork of evocative recordings boiled down to a potent three and half minutes of melodic charm. It’s extraordinary the sessions did not result in a cacophonous mess considering the sheer volume of chaotic noise exploding both inside the studio and Wilson’s fragile mind. But despite all the bedlam, the complexity of “Good Vibrations” somehow stands as one of the catchiest tunes of all time. The Beatles admit to pulling inspiration from this “pocket symphony,” while contemporary artists like Animal Collective, The Decemberists, and even Girl Talk owe thanks to its sonic mashups, myriad remixes, and ecclectic instrumentation (a Tannerin and a cello never sounded sweeter together). Experimentations and excitations make music fun, but perseverance, foresight, and a touch of insanity keep it timeless. -Dan Pfleegor

Madonna’s rise to superstardom was predicated upon a core dichotomy at the center of her public persona: She’s both an innocent, vulnerable girl and a sexual, confident woman. “Like A Virgin”, the title track from her second album and her first number one single, cemented this dichotomy. The song is probably not as musically dynamic as, say, anything by contemporaries Cyndi Lauper or Eurythmics, but Madge silenced critics who had marked her debut album a fluke success by injecting a liberal dose of sexuality into the burgeoning MTV culture of pop music. She creates a semiotic tangle by juxtaposing sultry “whoas” on the song’s bridge with her Lolita-esque “hey!” on the chorus; ditto for her black ’80s punk outfit and the white wedding dress. The video’s symbolism — lions, tunnels, masks — provided scholars with enough ammo to make Madonna an icon of post-modern feminism, or post-capitalist consumer culture, or sexual decadence in the face of neo-conservatism. Either way, without “Like a Virgin”, the superstar par excellence of the last 30 years would have just remained a hit. -Jake Cohen

According to an FBI bulletin sent to Priority Records in August 1989, N.W.A.’s greatest song “encourages violence against, and disrespect for, the law-enforcement officer.” Uh, was there ever any doubt? “Fuck tha Police” brought N.W.A. head-on with two issues its members had doubtless seen over and again in their native Compton: racial profiling and police brutality. Over funky samples of James Brown, Roy Ayers, Marva Whitney, and others, MCs Ice Cube, Ren, and Eazy-E took shots at cops with lines like “Searchin’ my car, lookin’ for the product/ Thinkin’ every nigga is sellin’ narcotics.” A statement this forthright couldn’t help but be, well, arresting – and nobody ever said Compton’s most willful did this one to make friends with the boys in blue. -Mike Madden

Not all of us are terrified of becoming culturally irrelevant. Most people don’t give it a second thought. James Murphy, on the other hand, feared it and his self-conscious, inverted, sardonic anxiety was epitomized in 2002’s groundbreaking single “Losing My Edge”. But it wasn’t until LCD Soundsystem dropped the funky basslines and hypnotic piano of 2007’s “All My Friends” that he really struck big and chord with the masses. In less than eight minutes, Murphy gracefully touched upon themes of abandonment, failure, nostalgia, loss, and redemptive yearnings. Again and again, Murphy cries out in dire pain, “Where are your friends tonight?” Each time it hits us harder and harder, thanks to the surging percussion that lifts every beat. As the sustain fades away on the last chord,  Murphy is right there beside you calming your restless heart, and walks away leaving an echo of some imagined midlife crisis. Relevancy? Dude, this track got millions to care about your coffee shop.  -Michael Zonenashvili

“Space Oddity” is about finding yourself in whatever galaxy you may reside in. It starts with a few subtle strokes on an acoutstic guitar, before Bowie “commences countdown” and orates the narrative journey of Major Tom. If understood as more of a cerebral fantasy, “Space Oddity” focuses on one’s search of independence through the courage to be alone, as constructed through the ideologue of Major Tom. Outside of that fantasy, however, it embodies the unique, if not strange, trajectory of Bowie’s influential career as an artist.  -Summer Dunsmore

“It has more hooks in it than anything I’ve ever heard,” said mega-producer/record exec Antonio “LA” Reid. “You could separate it into 12 different musical pieces and I think you’d have 12 different hits.” That’s all very true, but the power of “Billie Jean” reaches far beyond sheer hooks. The video, famed for those squares of road lighting up under Jackson’s flittering feet, is often cited with breaking the race barrier of MTV in the early 80s, when it became the first clip from a black artist to garner heavy rotation. When he sang the hit in 1983 at the Motown 25: Yesterday, Today, Forever TV special, Jackson premiered his now-iconic moonwalk, a move that went on to define his performances and redefine what your uncle would try to do at weddings. Spending seven weeks atop the U.S. charts, “Billie Jean” was Jackson’s most successful single; with its historical significance, both to Jackson the performer and music as a whole, its eminence is indelible, a mark pop music will wear proudly and gratefully for decades to come. -Ben Kaye

Following a string of minor hits covering artists like Junior Parker and the Temptations, “Let’s Stay Together” would be the first song to highlight Al Green’s shift from blues-tinged R&B to sweet falsetto. With the song’s main theme written by bandleader and producer Willie Mitchell and Booker T. & the MGs drummer Al Jackson, Jr., “Let’s Stay Together” centers around a rolling drum beat characteristic of flowing piano chord changes. Once Green heard the demo, he penned the lyrics in under half an hour. However, he wasn’t too thrilled about his vocals on record. Convinced they had a hit, Mitchell’s objective ears and skills as a producer eventually outweighed any of the troubled singer’s doubts and insecurities and the two released the song. Within weeks of its release “Let’s Stay Together” became Green’s first #1 single, opening a floodgate of subsequent hits that would eventually define Green as the sound of early ’70s soul. -Len Comaratta