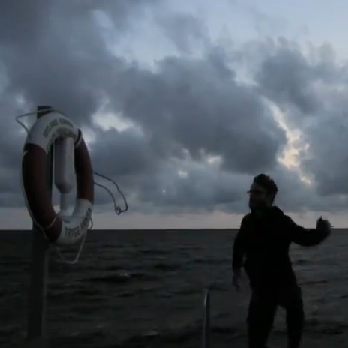 Thus far, Peter Bjorn and John drummer John Eriksson, aka Hortlax Cobra, has done a fine job translating his Night Shift material to film. Whether the bleary lights of “Repeat Performance” or the surreal ventriloquist act of “Viva Le Difference”, the clips have consistently felt uncomfortable, yet cohesive with the sounds.

It’s fitting then that the video for dancey album opener (and RSD comp feature) “Berlin” features, well, vaguely awkward dancing. A gentlemen in a jogging outfit sets out for what appears to be a late afternoon stroll, which turns into a solo dance party on a lonely pier. While this clip doesn’t feature the previously ubiquitous cobra mask, it does sport some pretty slick joint loosening. Check out the Ella Frenning/Morsan Productions-directed video below.