Deniro Farrar and Shady Blaze – Kill or Be Killed 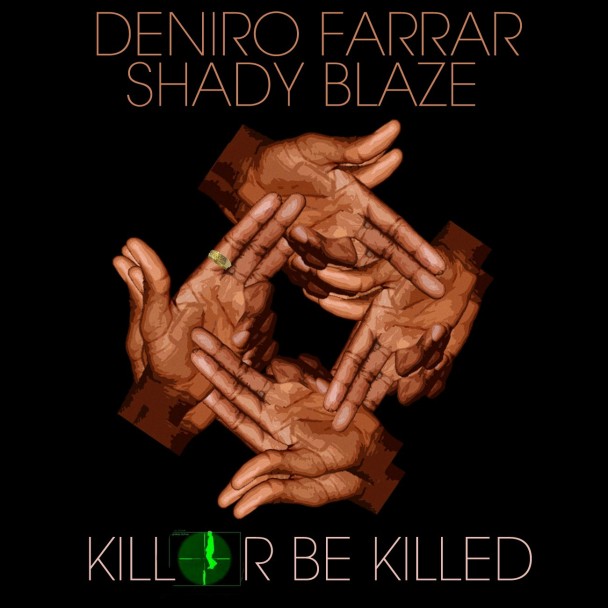 Charlotte MC Deniro Farrar raps with a lived-in, slow-and-deliberate ruggedness, producing cadences that have more than a little in common with those of Bun B. Oakland’s Shady Blaze, suffice it to say, is no Pimp C. Instead, he can usually be found spouting syllables at a double-time clip or faster, without much room for melody or easily noticed turns of phrase. While on paper these two might seem unlikely to congeal over the course of an entire project, their first collaborative album, Kill or Be Killed, is a success throughout, thanks to its embracement of well-tested sounds and its track-for-track consistency.

One couplet from “Therapture” sums the album’s central ideas: “People used to tell me that money is the root of all evil / Now I’m starting to understand what that saying means.” Over beats that blend the surreal woosh of cloud-rap with horror-score keys and harder drums, Shady’s and Deniro’s well-defined bars tend to outline the darker corners of hustling, with tales of desperate dealing and regrettably deceased friends abounding. This kind of stuff isn’t rare in rap, of course, but these guys have no problems stretching would-be clichés into satisfying 16-bar anecdotes.

Despite hosting an excellent cast of guests that seemingly resembles Fader’s wet dream – Boldy James, Main Attrakionz, ST 2 Lettaz, Haleek Maul – this album shouldn’t be reduced to mere “blog rap.” This is because so much of the music that’s defined with that tag lacks longevity, and it’s not hard to imagine the better tracks here (“Fallen Soldiers”, “On My Block”, “Rollin’”) continuing to get regular play in certain circles years from now. Be assured, Deniro and Shady have emerged as one of the strongest pairings in rap this year, and future collaborations between the two should be more than welcomed.

Essential Tracks: “Fallen Soldiers”, “On My Block”, and “Rollin’”