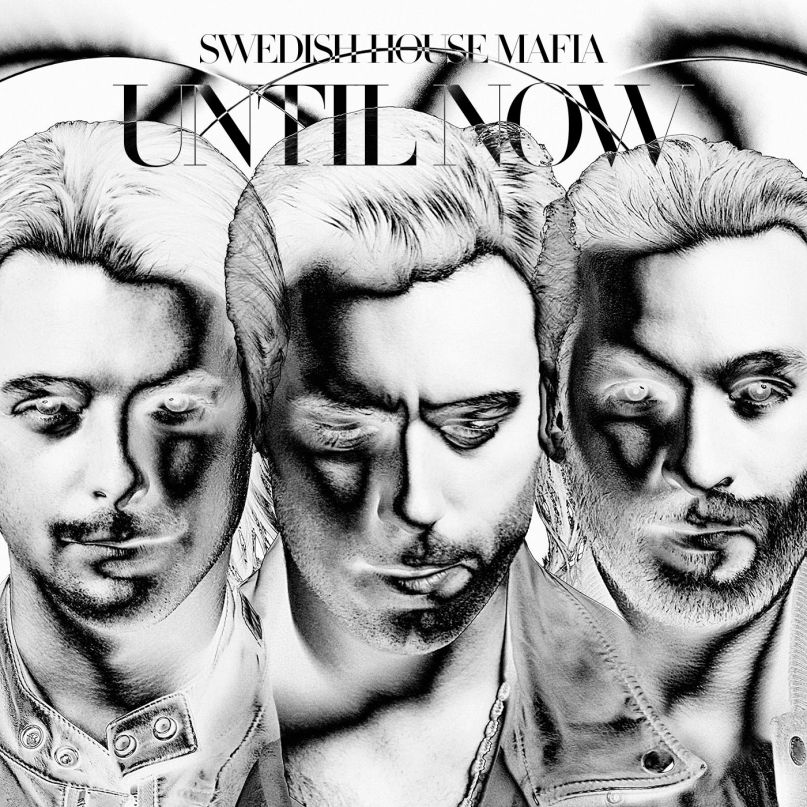 Electronic dance culture was established around the idea of artistic collaborations. The original dub producers altered the work of reggae musicians with their sound systems, house DJs reworked disco tracks to create a more minimal vibe, Detroit’s techno pioneers took to the tables to further deconstruct the sound, and much-lauded tag-team sets allowed for DJs and producers to hone their craft and expand individual track selections. There is a long heritage of influential pairings (Frankie Knuckles and Derrick May, Sasha and John Digweed, Erol Alkan and Boys Noize, Aphex Twin and µ-ziq, the trio behind Magnetic Man), but no electronic supergroup has ever pushed their genre to the heights at which the Swedish House Mafia is currently performing progressive house music. As the album cover for Until Now suggests, the trio of Axwell, Steve Angello, and Sebastian Ingrosso is no longer merely human, but a collective strand of energy that has the power to lift entire festivals or massive European stadiums toward unbridled euphoria.

The 22-track mix behind Until Now could easily be filled with SHM originals, but the outfit uses their own super-stardom to propel their growing family of electro-misfits. It is unlikely that many of the band’s fans would go crate-digging for Nari & Milani’s ”Atom”, but the track’s staccato bass line is a perfect segue into club-favorite “Leave The World Behind”, thus creating a giant fluorescent “CHECK IT OUT” sign pointing towards the former track. Rising star Thomas Gold’s heavy drum sounds are the focal point nearly halfway through the release, first with a caffeinated re-edit of Miike Snow’s “The Wave” and then with a crucial tie-in of his minimal “Singe2Me”. Before the album takes on more commercial remixes (The Temper Trap ‘s “Sweet Disposition”, Coldplay vs. Swedish House Mafia’s “Every Teardrop Is A Waterfall”, Florence + The Machine’s “You Got The Love” (Mark Knight Remix)), they showcase the uplifting female vocals of “Beating of My Heart” (Matisse & Sadko Remix), one of the next club monsters courtesy of the UK’s M-30x.

That house bounce may form the backbone of the continuous mix, but multiple injections of Knife Party provide Until Now with a rage that crowds relish, which was absent from SHM’s debut LP. “Antidote”, which has already been floating around for nearly a year, mixes a spiraling synth wave with a wobbling bass line and quick-hitting hip hop vocal that leaves listeners stuck in an avalanche of sound, unaware which direction is up and which leads to eventual doom. Following the nostalgic waves and subtle ivory strokes of Red Carpet’s “All Right”, the mix contorts the slowed-down synth tones with the opening crescendo from live staple Pendulum’s “The Island” (Steve Angello, AN21, Max Vangeli remix). The record flips the script with the penultimate track, Knife Party’s testosterone-ravaged remix of SHM original “Save The Word”.

With other tracks ranging from a Tommy Trash remix of Steve Aoki’s “Ladi Dadi”, the freshly cut collab between Angello and Third Party known as “Lights” (which comes equipped with one of the better drum lines from any SHM project), an Usher remix (“Euphoria”), and two Coldplay re-edits, the deluxe disc’s main criticism is that it is excessively current. The album showcases a range of talent, but how about going back five, ten, or even thirty years to show fans some of their influences? Earlier this year, Erol Alkan released his newest Bugged Out Mix, a dual disc that spanned over four decades, but Swedish House Mafia are stuck in the recency effect, unable to see the value of tracks that were spinning well before the advent of Beatport.

For Swedish House Mafia fans, Until Now is exactly what they wanted out of the trio. For house music purists, SHM have been off the radar since the backlash surrounding their possibly pre-recorded sets, and no amount of crisp production or riveting track selection could atone for that mistake. Love them or hate them, two things are for certain: 1) This album will be better live when accompanied with pyro and a massive LED screen; 2) at least by listening in the safety of your own home, the chances of leaving with a stab wound are greatly decreased.