Dirty Projectors – About to Die EP 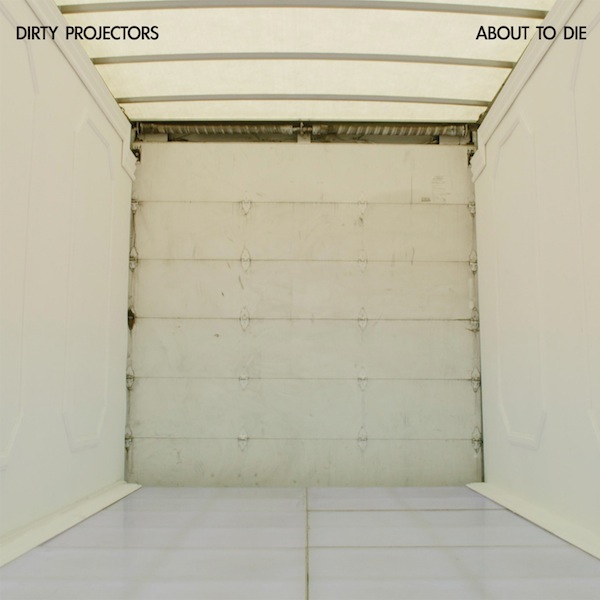 According to the press release that came with the excellent Swing Lo Magellan, Dirty Projectors’ Dave Lonsgtreth “wrote 70 new songs and beats” while spending time alone in “a weird house” in upstate New York. The musical component of the disc showed signs of that insulated, isolated mindset, hearkening back to the slender, sparse arrangements of early albums like The Glad Fact. The band had grown since, so the layers of female harmonies and slippery bass had to fit into Longstreth’s solo structures. The lyrical content never felt isolated, though, instead developing an incredible emotional connectivity. To continue that theme, their new EP About To Die offers one of the LP’s stronger tracks, and pares it with three tracks that presumably come from the 58 that didn’t make the cut.

Longstreth confirmed the heart-stirring aspect of the set before its release on Twitter, dedicating the swooning “While You’re Here” to Gerard Smith, the recently passed bassist of TV On the Radio. Longstreth’s vocals soars throughout the mix, with verdant hills of strings rolling underneath. Logically, the falling violins faint and keel as Longstreth notices his friend’s absence: “my friend is silent/ his ghost is quiet/ but we’re crying again.” The reminder of the title, though, turns the violins triumphant, swarming up to meet Longstreth’s voice. “While you are here/ you are alive,” he imagines the absent friend saying. Absent of context, it’s a “no duh” moment, but in the middle of the quick-bowed violins, in Longstreth’s up-twisted coo, it’s a powerful admonition to live in the moment. This reminder, then, brings the friend back, returning his brightness to a resonant major chord in the lush strings. “My friend is rising and shining again,” Longstreth calls out, and all seems right.

At first blush, the EP’s title track would be a square peg in the round hole labeled Straightforward Emotion. A single verse drops zombies, mutants, and goblins into the equation, and everything centers around some mythic “tablet of values.” The drum stutters and patty-caking backing vocals embellish the epic, the hard groove luring the inevitable acceptance of the vague story. The core value that shines through the fog as a sort of lesson, again, is a simple emotional truth. “Where would I ever be without you?” Longstreth asks, insisting on companionship in the face of improbable tasks and the inevitable terror of death.

The connection to pure, honest emotion comes through in the recurring motif of hand-claps. Hi Custodian (the film that accompanied Swing Lo Magellan) featured footage of guitarist Amber Coffman and vocalist Haley Dekle clapping and slapping like kids at recess, the cycling patterns giddily familiar, natural. They’re used as an extra layer of percussion in the album and again here on the charming “Here Til It Says I’m Not”. “Simple Request” continues this childlike frankness, Longstreth opening with the open-booked “I wanna know where you are right now/ who you are right now.” There’s a longing for connection in the familiar musical tropes as well as the lyrics, a guileless attempt at kinship.

More than many other follow-up EPs of this sort, About to Die offers a bite-sized take of the entirety of Swing Lo Magellan, encapsulating its strengths in four songs. The LP succeeded such that this set doesn’t outshine its older sibling, but it certainly acts as a logical and warm companion, something that Longstreth seems to be insisting upon throughout.

Essential Tracks: “About to Die”, “While You’re Here”