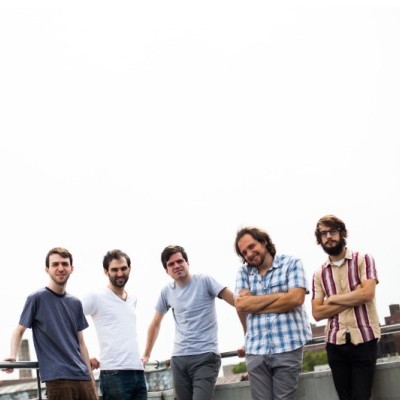 After releasing one of 2010’s most thrilling albums in the American Civil War-based The Monitor, Jersey-based lit-punks Titus Andronicus are back with a somewhat different sound, a mostly different lineup, and an entirely different album, Local Business. Recently, Consequence of Sound spoke with frontman Patrick Stickles about the new album, the band’s many changes, finding inspiration in Nirvana’s In Utero, and more.

It’s not fun to have two separate entities. When we made our records previously, we had a lot of guest musicians, a lot of ringers, and as a result, the live show wasn’t very representative of what was on the record and vice versa. We wanted to make a record that reflected the energy of the live show more and that we could faithfully replicate on stage every night. The first two records had so many bells and whistles on them that the live show, which was mostly guitars, was quite a different thing. Considering that the live concert has been the focus of our attention these last few years, it seemed to make sense to do a record that was more faithful to that.

It was equally intense but in different ways. With The Monitor, we had to do, like, hundreds of overdubs on every kind of instrument, so there was quite a long and grueling schedule. Making Local Business was challenging in its own way, because we recorded it mostly live, and so we had to do probably 100-plus takes of every song. It’s hard to get everybody to play the songs correctly at the same time, to get five performances going all concurrently. So we had to spend quite a long time just playing the songs over and over and over again.

You’ve become a pretty formidable presence on Twitter, but there was a period of two or three months when you weren’t tweeting much at all. I’m assuming this was during the album’s recording process  were you not tweeting because you found it necessary to be living, eating, and breathing the album and the album only?

There were a few reasons why I wasn’t tweeting so much. To be a good Twitterer, you need to have a certain amount of decisiveness, a certain amount of confidence in the most excruciating minutiae of your life. At the time, I just wasn’t feeling that so much, at least not as much I was in months previous. And furthermore, being locked up in a studio, there wasn’t much time to report. All my tweets would’ve been like, “We played all the songs again today, and they still didn’t sound good enough.” Or like, “Oh hey, we’re playing Zelda now.” That’s not really exciting Twitter content.

The first time I heard those opening lines of Local Business  Okay I think by now weve established everything is inherently worthless/ And theres nothing in the universe with any kind of objective purpose  I just started cracking up, because it seemed like this self-parodying exultation after all the apparent mental and emotional strain that went into the writing of The Monitor. Are those lines as in jest as I took them to be?

It’s a little bit tongue-in-cheek, yeah. It’s like saying that we’ve flogged the dead horse, so let’s just take this as an understood thing, a given, and we can continue our conversation from there. I was inspired by the opening lines of In Utero by Nirvana: “Teenage angst has paid off well/ Now I’m bored and old.” I think it’s good to kick off an album with a little bit of self-awareness.

Guitarists Adam Reich and Liam Betson as well as bassist Julian Veronesi recently became full-time members of Titus after Amy Klein, David Robbins, and Ian Graetzer left. How has this most recent set of roster changes affected Titus so far?

The most recent [addition] is Adam, who has been great for us so far. He’s a super-talented guy who knows a lot about music, and he plays every instrument under the sun. He’s a great guitar player, too, so the effect is that the new album has got some more bitchin’ solos on it than I would have been able to pull out.

You have to understand that Liam isn’t exactly a new member of the band; he played with us back in the early ’00s, and he played on [2008s The Airing of Grievances and The Monitor]. So bringing him in was more like a homecoming than a change. And David Robbins, who used to do guitars and keyboards for us, left, so there isn’t as much piano on the new album as there might have been otherwise.

There are definitely themes to be found in Local Business, but its not a concept album like The Monitor. Do you think youll do another concept album?

It’s hard to say. I’m not really thinking about another album right now. Doing this one took so much of my time, absorbed so much of my life, that I haven’t had the time or the wherewithal to look beyond it. But I wouldn’t rule anything out. If a concept comes along, maybe we’ll do [a concept album] again.

Theres more humor in the new album than there is in the first two records. How do you think the humor will translate in a live setting?

It’s good for the show to have some more lighthearted moments. We want to run the whole gamut of emotions instead of all gloom and doom, all the time. We’ve had some fun with some covers in the past, but now we’ve got a couple of lighthearted songs. I think it’ll be a good thing for us to widen the emotional palette a little bit. Nothing wrong with that.

The sixth song on the album is called Titus Andronicus vs. the Absurd Universe (3rd Round KO). Since its never made clear, which of the fighters wins, and why couldnt the loser go more than three rounds?

I put the “(3rd Round KO)” in there because it’s the third Titus Andronicus song to feature our name in the title. It’s also a reference to the song “Second Round K.O.” by the rapper Canibus. I don’t know if you’re familiar with that song, but in my opinion it’s probably the greatest diss song of all time  its a diss against LL Cool J  and we wanted to honor it.

As far as who won, I would say the universe always wins. That’s a fact of life. The universe is so much bigger than the individual.

Could you explain how your eating disorder, selective eating, affects your everyday life? What do you do to mitigate its effects?

I don’t really do anything to mitigate it. It’s been something that I’ve dealt with my whole life, and at this point I’m kind of resigned to it. In terms of how it affects me, it makes it tough to always keep food in my belly. Sometimes I have to go out of my way to get [food], sometimes I just can’t eat at all, and it gets really hard when we’re on tour. But that’s life. Everybody’s got their struggles, and this is mine. One of them, anyway.

Youve always had some of the strongest, most literary lyrics going, and there have been numerous literary allusions in Titus history, starting with the band’s name itself. Do you have any non-musical writing projects going right now?

No, not really. [Laughs.] Aside from Twitter and our blog, which are the extent of my literary aspirations right now, I might write a book someday, but that’d be way down the line.

Theres been a lot of existentialism in the bands material. Do you have any existential texts to recommend?

I would say the best one is The Stranger by Albert Camus. That was my introduction to the world of existentialism, back in high school. It’s a really easy novel to read  it’s short, and the language is really direct. I think anybody could get into it.

Last month, New York Magazine ran a story on Grizzly Bear that talked about how unstable indie rock bands tend to be financially. Do you have any comments to make with regard to this issue?

I’d say [the story] is fair. Indie rock music isn’t always the biggest cash cow, but I feel like that’s understood. Maybe people just need to tailor their expectations a little more about what kind of reward they can get for a life in indie rock, or doing any kind of art, really. I’m certainly not the most well-off guy, but I’m rich in other ways, rich in spirit. Money isnt everything.

If you’re gonna choose a life in indie rock, you should understand that you might not have a lot of things that your peers have and that you think you’re entitled to. That’s the tradeoff you’re gonna have to make to live the life of the artist.

Over the past few years, we’ve seen the rise of EDM and other newer types of music, and there’s no doubt rock in general has been struggling on a commercial level. Is this something you and your bandmates think about and have tried to somehow counter?

I think about it a lot. It would be nice if rock and roll were still the number one force in youth culture, but obviously it isn’t, so there are fewer pieces of the pie to go around. But I’m hoping we’ll be able to reach a place where we’re beyond trendiness. I’d like to get to a point where the people who like the band like it on its own merits instead of listening to us as something like a hip status symbol. Even if rock and roll isn’t the biggest thing right now, hopefully we can get the people who actually like the music and aren’t using music as an accessory to their lifestyle or something. Not that that’s what all EDM fans are doing, but we’re not going to be seeing any of that money.

Last but by no means least, how do you think shaving your beard has affected you as a human being?

One of the things that it’s done is that I’ve found myself talking about my beard more than I did when I actually had it. It’s funny, I figured if I got rid of the thing, people would stop asking me about it. But now it’s on people’s minds more than ever, apparently. So that’s weird.