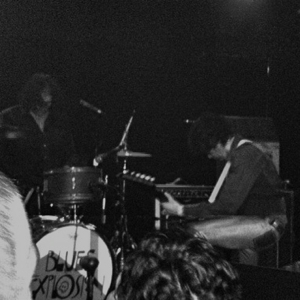 The Jon Spencer Blues Explosion spent most of its initial 15 year run occupying a niche corner of the indie rock universe, one dominated by campy reverb vocals, tasty trad-blues licks, and slabs upon slabs of ear-shredding volume. But after an eight year layoff, one had to wonder how well Spencer, guitarist Judah Bauer, and drummer Russel Simins preserved their wickedly acidic garage blues style. Fortunately the trios set at Bottom Lounge provided tactile evidence that their as blissfully zonked out as ever. Louder too.

One-man retro tunesmith Bloodshot Bill opened things with a fun, sweaty, downright perverted set of minimalist rockabilly raunch. Decked out in a purple robe and pinstripe pajamas, the guitarist ripped at his guitar while stopping away mercilessly at his bass drum and hi-hat. Lyrics largely gave way to manic cackling, heavy breathing and even the occasional fellating of the microphone, making for the kind of balls out bizarre stage show that, oddly enough, felt perfectly at home in the context of a Blues Explosion show.

In short order, Spencer, Bauer, and Simins were onstage and ready to further sleaze up the joint with their sardonic blues noise. Despite the layoff, it was immediately apparent that time did nothing to curb the band’s ferocious chemistry and appetite for all things loud. Spencer, rail thin, leather pants and all, is still the frenetic showman fans have come to love. Banter was largely limited to his repeated refrain (read: ear-splitting scream) of “Blues Explosion”, which nonetheless never failed to amp up the eager crowd, while he lassoed fans into his twisted blues rock realm, even going as far as to find his way into the crowd for a stretch. Bauer tickled his guitar with precision, putting the blues in “Blues Explosion”, while Simins capably held everything down behind the kit.

Watching the band now more than 20 years into the game, there’s an overwhelming sense that the Blues Explosion, with Spencer’s lead, is only as strong as the sum of its parts. The chemistry shared between Spencer, Bauer and Simins is irreplaceable, and this crazy thing they do onstage only works when the three share the stage. Touring behind Meat and Bone, their first proper studio album since 2004’s Damage, the band’s set boasted a fair amount of new material (“Black Mold”, “Get Your Pants Off”), which fit right in with the band’s healthy back catalog.

But it was fan favorites like “Afro”, “Chicken Dog”, “Blues Man X”, and “’78 Style” that revved the fans’ motors, and the band fed off the raucous energy. Spencer and Co. also threw in a greased up cover of the early Beastie Boys hit “She’s On It” , which surprisingly didn’t feel out of place. If the time away from touring and recording was needed, at least they’re back with renewed energy and purpose.