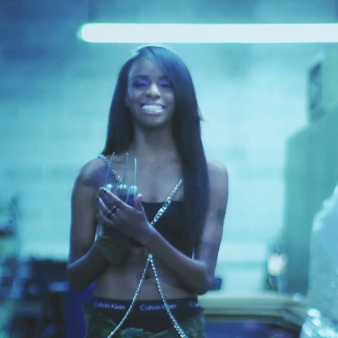 Even if she hates everything and is scarier than a crocodile, New York rapper Angel Haze has proven herself to be an inspiration for youngsters with her emotional vulnerability and uncompromising ways. But in the music video for Reservation EP standout “Werkin’ Girls” , Haze demonstrates that not even kids are safe from her cynical wrath. Wearing her designer Freddy Krueger claw-glove, Haze observes an adorable game of double dutch between two young girls before calling in her minions (including the dreaded Captain Tin Foil Face) to wreak havoc with despicable acts of violence and kidnapping. Is this Haze’s metaphorical way of bucking off her unwanted status as a role model, or does she really hate jump ropes that badly? Contemplate her blackened heart when you click play below.

Reservation is out now via True Panther/Noizy Cricket/Biz 3. Haze also appeared on last night’s BET Awards cypher alongside Childish Gambino and A$AP Rocky, which you can replay here.