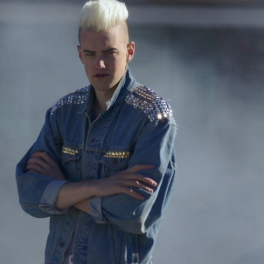 On paper, Toronto electro-pop maestro John ORegan, aka Diamond Rings, couldn’t be less likely of a candidate for the muscle car culture. But in the music video for “Runaway Love”, he readily embraces the scene, traipsing around some track in Middle America with his alt-leaning cohorts, taking in the sights as people prep their cars, torch marshmallows, pump weights, and drink oil, which we hope is standard practice at these events. Unsatisfied with merely observing, O’Regan eventually hops in to his own sleek blue Mustang and enters a run-what-ya-done-brung drag race. His victory or defeat isn’t important; what is, though, is that he exposed himself to a new group of people, had fun, and looks totally badass with that blonde mohawk and blue racing jumpsuit. Watch Speed Racer 2012 in action below.

Diamond Rings’ latest album, Free Dimensional, is out this week via Astralwerks.