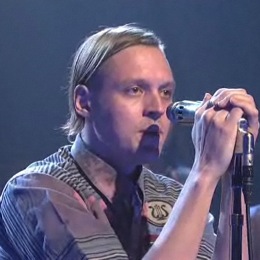 This crazy week of music news continues with yet another unexpected surprise. How many of you guessed upon waking up this morning that’d you hear a new Arcade Fire song today? Well, that’s now a reality, as footage of the band performing a new song has just hit the web.

As ArcadeFireTube points out, the band performed “Crucified Again” during an event to celebrate Partners In Health’s 25th birthday at Guastavino’s in New York City last night. The song actually debuted in 2011 during a surprise show in Haiti; however, this marks the first time the performance has been captured on film.

Arcade Fire are currently working on their fourth studio album, the follow-up to 2010’s Top Star-earning The Suburbs. While at the Polaris Prize Gala last month, drummer Jeremy Gara hinted that the album is almost complete and could see release soon. Based on a series of non-committal answers in recent interviews, former LCD Soundsystem frontman James Murphy is rumored to be the album’s producer.