Win tickets to see The Who perform Quadrophenia 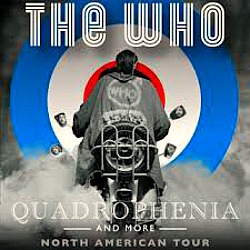 Beginning next month, The Who will embark on a massive North American tour, their first such venture in four years. Over 36 dates across the U.S. and Canada, Townshed and Roger Daltrey will perform their 1973 classic Quadrophenia in its entirety, along with other favorites from their iconic catalog. If your post-holiday season budget potential doesn’t look so good, or if your dad didn’t hold on to that ticket for their canceled December 1979 gig, Consequence of Sound’s got you covered.

We’re giving away three pairs of tickets to three lucky winners. The best part is, it doesn’t matter what U.S. city you want to see them in, because we can get you in. Wanna see their opening gig in Orlando, FL? We can do that. Their MSG show in NYC? Sure. Wanna trek out to Louisville, KY just to say you saw a legendary band play the KFC Yum! Arena? Well, we can’t argue with that.

Let’s recap: three pairs of tickets, three winners, any U.S. city on The Who’s upcoming itinerary (winner pays travel and accommodations, if necessary). And there are two different ways to enter:  through our mobile app or by simply filling out the form below. For those that havent nabbed the app yet, just head over to iTunes or the Android Store and download it for yourself. Create a log-in or use your Facebook account, then just poke that Giveaways button to enter. Done. As for the form, well, just follow the instructions down yonder. Also be sure to follow Consequence of Sound on Twitter and Facebook.

Check out The Who’s tour schedule below the entry form to see when the band is coming closest to you, and good luck!