9th Wonder and Buckshot – The Solution 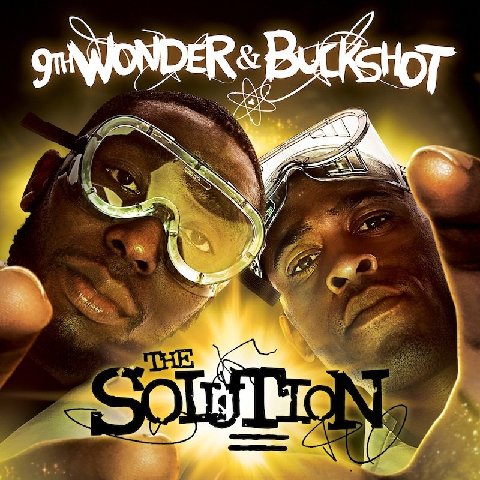 Buckshot and 9th Wonder are seasoned vets; the former led the gritty Black Moon crew, the latter produced the beats for rap group Little Brother. Citing influences like DJ Premier and Pete Rock, 9th Wonder emulated the old school with soulful, sample-heavy production– but Buckshot was the old school. Thus, their first collaboration, 2005’s The Chemistry, felt like a natural union. The Solution is their third such collab, and while they aren’t reinventing rap, they’re reinforcing its core values: boom-bap beats, eloquent lyricism, and reverence for the past (and the way things used to sound).

Buckshot is quick to remind us of his Black Moon days on opener “The Big Bang”: “Outta nowhere/ When I appeared/ To some of ya’ll, to most of ya’ll I’m a pioneer.” And he is. Buckshot rapped about the streets with a brutal honesty and nihilism that pre-dated both Nas and Mobb Deep. 9th Wonder himself said that those early Black Moon singles “changed his life”; here, we’ve come full circle.

Both are in exemplary form on “What I Gotta Say”. 9th cuts up a quivering vocal sample as crashing piano chords keep tempo; Buckshot latches on, spitting his way through images of street life (nice cars, shitty cars, glocks, hoodies, etc.). His lyrics on The Solution rarely follow any linear device. Instead, his words are snapshots of Brooklyn—how it used to be and how it’s changed.

Buckshot and 9th Wonder’s relationship is one of artistic respect; it continues to foster anachronistic records and old-school vibes. Although The Solution is too hung up on the past to be relevant in the present, it remains a competent throwback to hip-hop’s golden age, an era that both artists seem to be yearning for. That nostalgia pervades The Solution.

Essential Tracks: “What I Gotta Say”