Guided by Voices – The Bears for Lunch 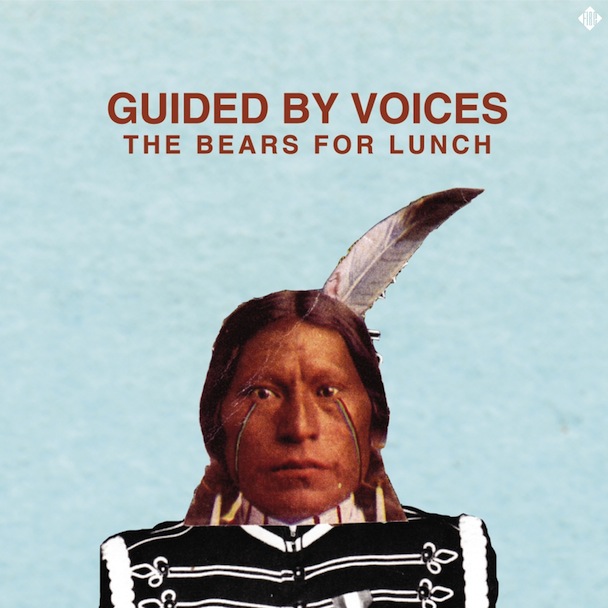 In 1999, Guided by Voices switched gears in an effort to engage a brave new world entering a brand new century. Bandleader Robert Pollard brought in Cars frontman and power-pop producer-extraordinaire Ric Ocasek to assist in his vision. Do the Collapse was born out of said vision; and it certainly sounded different. Was it pressure, whether self-imposed or label-enforced, that brought forth the overproduction? It was the band’s first album with TVT Records after leaving indie-darling Matador in its lo-fi dust. “Hi-fi only ahead for this incarnation of GBV,” might have been the rallying cry. “Weezer-esque keyboards in our first track, please.” God knows what else was going through Pollard’s mind, but the album as a whole didn’t work. There are some keepers in this otherwise disposable effort (“Things I Will Keep”, “Wrecking Now”, and “Hold on Hope”), but a lesson was learned.

It may have taken some time, but in 2012 the Guided by Voices (still in “classic era” mode) adhere to that belief. The Bears for Lunch, the band’s third album of the year, is another recommended effort that recalls what the band does best. It’s lo-fi with some hi-fi highlighting the in-betweens. It’s oft-sloppy musicianship that doesn’t play calculated in the slightest. It’s goofy, it’s moving. The songs are short, but sometimes feel epic. With these blurbs one could label it as “Guided by Voices by the Numbers,” but so what? Why change the process when the end result equates to this?

The band once again sounds as though they’re creating music and lyrics during the recording. Take “Hangover Child”, when the music brings to mind a general preparing his troops for battle, but Pollard sings of the titular hangover child waiting in checkout during red-light sales (of course). “Tree Fly Jet” sounds lowest-fi, with Kevin Fennell’s drums trying to find the pace of its jutting guitars. Pollard’s lyrics in “Have a Jug” may be coming straight out of a recently scribbled-in notebook. It’s that lack of preparation that separates the band from so many others who try so hard to get that sound just right, destroying any spontaneity in the process.

Tobin Sprout is the yin to Pollard’s yang, or vice versa, or whatever. The band changes its tone when the former is out in front singing in his trembling tenor. His appearance is felt early during the playful “The Corners Are Glowing”, later with the scratching guitar and layered harmonies of “Skin to Skin Combat”. Between Sprout and the eternally-cigarette-smoking Mitch Mitchell, an electric backbone is formed, and it’s sturdy enough to keep Uncle Bob’s head from rolling off (the man’s been known to have a drink or a dozen). However, the band finds just as much success when it strips down the nearly nude production on Bears.

“Waking Up the Stars” is Sprout quickly plucking his acoustic guitar, accompanied by slight strings and a knee-clapping percussion while he muses on (“As I’m waking up the stars / I’m wondering how they might be feeling / Speeding ‘cross the ceiling / As I’m wandering once more”). Pollard’s acoustic highlight is the plainly stated “You Can Fly Anything Right”; his vocals at an all-time Guvnuh’-high. It serves as the penultimate track, and he couldn’t have chosen a better song to do the deed. You can hear the tape spinning.

The softer moments work well, but the band never forgets its garage-band roots. Bears’ first and last tracks are steps up from the openers and closers of the band’s other 2012 releases. “King Arthur the Red” announces the arrival of the entire band as its drums, bass, and guitar stomp into the playground. “Everywhere Is Miles from Everywhere” bids the listeners farewell with its jangling guitars and triumphant promises, however odd (“I will bring you rabbit you can bet/ You can bet”). It will be interesting to hear how the band takes off from that song in the near future — they have another album slated for early next year.

Like many GBV releases, there is filler. Look no further than the plodding piano of “The Military School Dance Dismissal”, the dull verse/chorus structure in “Have a Jug”, and the repetitive “Finger Gang”. One could argue that just taking the best material the band recorded this year would create a five-star LP, as opposed to three good-to-very-good ones. But that isn’t how Guided by Voices does things. At their best, Pollard and Sprout will sequence around 20 songs of varying lengths. The band will play their designated instruments, some better than others. There will be a limited number of takes. Basically, it will always be more of the same — and thank God for that.

Essential Tracks: “Hangover Child”, “Waking Up the Stars”, “You Can Fly Anything Right”, and “Everywhere is Miles from Everywhere”