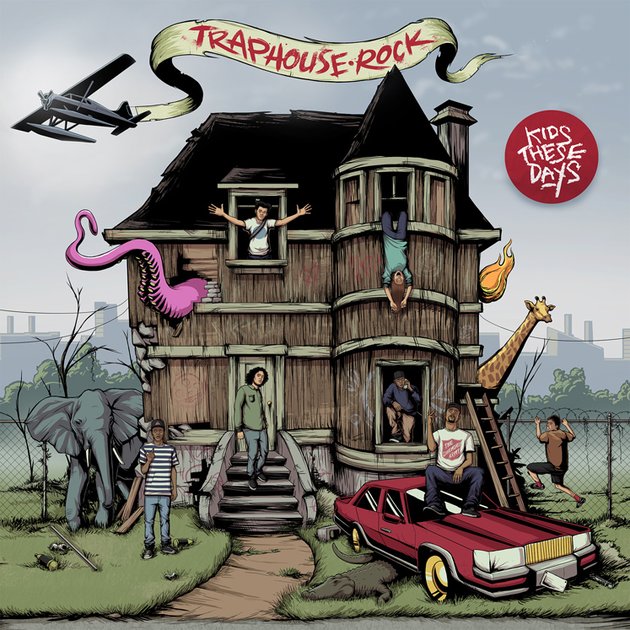 Kids These Days are best heard in person. That’s neither a knock nor praise; it’s just in their DNA. The Chicago rap-rock collective is composed of seven young musicians, all around 20-years-old, and with substantial music educations, mostly in jazz improvisation. From the get-go, it was more likely that their path to success would be paved with lauded festival sets and spotlight performances – where they can use the kind of hyper-aggressive stage presence that only seven ambitious band kids fresh out of high school can – than with their studio recordings

So, does the youthful explosiveness that they built themselves around translate onto their first official LP, Traphouse Rock? Yes, loud and clear – but it also shows their age more, confirming that exceptional chops and limitless energy can only do so much for them on record.

The aesthetic variety central to the Kids These Days brand is, of course, their bread and butter. There’s non-stop horn section accompaniment, technical verses from rapper Vic Mensa, and equally technical beats beneath them from drummer Greg Landfair. There’s also some blues rock, some heavy rock, some light pop, and live samples of Radiohead’s “Creep”, 50 Cent’s “Wanksta”, and the Pixies’ “Where is My Mind?”. It’s the kind of ADHD charm that will resonate especially well with teenagers, but can be tough to swallow when Mensa jumps wholeheartedly between rapping about guns and weed and congratulating a friend on Ivy League acceptance.

This all makes the juicy factoid surrounding Traphouse since its announcement that much more of a stumper: Most of the album was produced by Jeff Tweedy in his storied Chicago loft/studio. After he spent much of the last two years championing the career revivals of Mavis Staples, Nick Lowe, and Bill Fay, it seemed curious that a band of kids 40 or 50 years those artists’ minor would be next in line for the Tweedy bump. But ultimately, his role on Traphouse and in KTD’s career path is just as noble: he’s no longer acting as a defibrillator, but as a guiding presence for a wildly passionate young band that could use one.