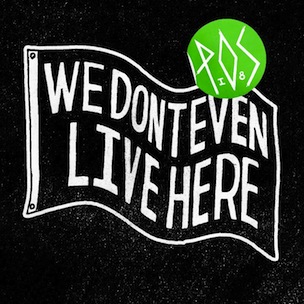 Minneapolis emcee Stefan Alexander released 2009’s Never Better when the wounds of the Bush administration were still fresh. The beats were as stark as Minnesota snow, his words fueled by leftist cynicism and a Midwestern, see-through-the-bullshit sensibility. Although Alexander (who records under the moniker P.O.S) was never overtly political, he was clearly dissatisfied with the socio-political landscape and disguised his frustrations as abstract rhymes.

Three years later, P.O.S is still pissed. Pissed at politics, pissed at sensationalized culture, and pissed at the rap game. “My whole crew’s on some shit/ Scuffing up your Nikes, spitting on your whip,” he disses on “Fuck Your Stuff”, a direct affront to what hip-hop’s become. While Never Better shoved the listener around with its punk-rock abrasion, We Don’t Even Live Here is comprised of sweaty, dance-with-your-shirt-off beats. They’re bombastic enough to drive home the acerbities Alexander lays down.

On “Wanted/Wasted”, he slips “fuck sports” and “I’m the best in the world” into the same stanza. Yeah, it’s elitist (and a little off-putting), but Alexander’s always been this way. He’s blunt, flippant, and self-righteous. But he embraces the resentment, stating, “I constantly recommend a little bit of disdain, a little bit of resistance” on “Lock-Picks, Knives, Bricks and Bats”.

P.O.S has never sounded as energetic as he does here; it’s a shame that the Doomtree founder had to cancel the We Don’t Even Live Here tour because of kidney disease and the emergency surgery it required. This is an album for rocking venues, for pulverizing audiences; it’s a document of Alexander’s anger. Lyrically, he’s never been more transparent, and with that transparency, we see him for what he truly is—a bitter antagonist.