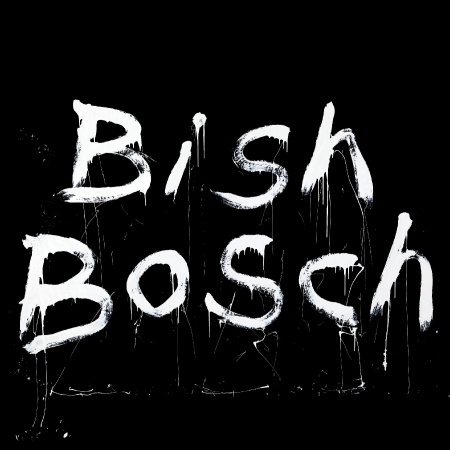 There are machetes, there are farts. There’s a little bit of Ennio Morricone, there’s a strong whiff of Danny Elfman. There’s a dime bag of laughs, there’s a hallway of horrors. It’s this sort of back-and-forth that could lead someone to believe they’re actually dead while listening to Scott Walker’s latest opus, Bish Bosch. Before we go any further, let’s diagram the album’s title, because, really, there’s been a strong push for that behind its promotion. Get those pencils ready, folks: Bish translates to “bitch,” while Bosch refers to the fifteenth century artist Hieronymus Bosch. More specifically, the ties to Bosch correlate with his renown triptych painting, The Garden of Earthly Delights.

Here’s one of many, many notes behind this album:

A Hieronymus Bosch painting can’t be apprehended in a single blink of an eye. The Garden of Earthly Delights is made up of panels in parallel, with scores of tiny actions and allegorical representations teeming in every square inch of canvas. The painting is big enough to encompass heaven and hell.

Arguably, so is Bish Bosch. Context aside, it’s a bastard of a listen — a rare, tough piece of meat too savory to spit and toss aside. One can lose themselves in this album, and early on, too, trembling under the furious assault of dystopian instrumentation. It’s fair to parallel Walker with Bosch because the two are so intricate in detail and grand in scope. Is this a surprise? Since the ’60s, he’s refused to settle, always finding ways to innovate himself. What started as velvet baroque pop on his 1967 debut solo album, Scott, has slowly evolved into specially curated experimental art rock, where a 20-plus-minute production about Attila the Hun’s Moorish jester sounds perfectly reasonable. It’s been established that with each release, Walker casts himself further down the slender rabbit hole toward the unknown.

Similar to 1995’s industrial-leaning Tilt and 2006’s horrific masterpiece The Drift, there’s a theatrical element that runs through this album’s 73 minutes. Yet, Walker’s work lends itself to that medium. So much so that in 2008, London’s Barbican hosted a production titled Drifting and Tilting: The Songs of Scott Walker, which featured eight of his tracks and involved both Damon Albarn and Jarvis Cocker. What’s more, Walker’s been heavily involved with operatic pieces over the last few years, having scored a reproduction of Jean Cocteau’s 1932 play Duet for One just last year — something he worked on amidst recording Bish Bosch. It’s partly crucial to keep all this in mind, if only to make sense of the record’s irregularities.

Such attributes lend to its puzzle-like nature. As his press release indicates, the nine weaving tracks “revel in unfamiliar words, technical terminology and obscure references, so keep a dictionary handy and bookmark Wikipedia.” They’re not kidding; in fact, one feels like a tired, irate Jack Torrance after one listen, but here’s the thing: there’s always cause for return. The album’s breathy centerpiece, “SDSS14+13B (Zercon, A Flagpole Sitter)”, for example, could take days to fully encompass. It follows four harsh, berating acts, suspending itself in absolute silence, leaving Walker to ruminate, “…why sit in the dark handling yourself,” before it swells with sharp strings seemingly culled from Bernard Herrmann’s best. It’s a complex tale of an actual dwarf — in this case, a real-life Moorish jester named Zercon, who served at the fifth century court of Attila the Hun — who moves throughout history and eventually evolves into and dies as a dwarf star, specifically SDSS14+13B (aka, the coldest substellar body of the universe discovered thus far).

If that sounds, dare we say, pretentious, that’s because it is, though it’s absolutely earned. The shifting instrumentation, which welds together would-be influences of Throbbing Gristle, Ennio Morricone, Trent Reznor, John Carpenter, GyÃ¶rgy Ligeti, and two dozen other pop cultural artifacts, is so engrossing and magnetic — simply because Walker never once loses focus. He exudes an air of authority, something he rapturously inherits on opening track “‘See You Don’t Bump His Head'”. His staunch repetition (“While plucking feathers from a swan song…”) feels like a dizzying spell, especially over what sounds like a broken washing machine and spectral synths. Once you’ve been entranced, he runs free as the lone bard, who speaks like Dante or Virgil or a half-sober Jim Morrison. On paper, it’s all very nauseating, but as a performance piece, it’s eerily romantic — in that ominous, we’re-all-fucked sort of way.

Speaking of which, there’s little light here. Although Bosch is one half of the album’s title, and The Garden of Earthly Delights is bookmarked as an influence, heaven remains to be seen on Walker’s latest. Rather, there’s bleak, torturous symbolism (“Corps De Blah”),  references to the Ku Klux Klan and Khrushchev (“Phrasing”), the pandemonium of epidemics (“Epizootics!”), and biblical metaphors aplenty (“Tar”). If that sounds morbid, the foley work of Walker’s array of musicians –  guitarists Hugh Burns, BJ Cole, and James Stevenson; drummer Ian Thomas; trumpeter Guy Barker; percussionist Alasdair Malloy; bassist John Giblin; and musical director Mark Warman — bring such horrors to life, utilizing the basic elements and the bizarre. “Epizootics!” makes use of the rare and elusive tubax, “Tar” loops four-foot-long swishing machetes, and closing track “The Day the “Conducator” Died” brings in the sleigh bells incidentally just in time for the holidays.

There’s no arguing that Walker’s taken some great liberties here. (Admittedly, the layer of Windows 95-stripped fart sounds in “Corps de Blah” is a little much.) But that’s his thing, and he does it well. And while Bish Bosch isn’t nearly the departure The Drift was six years ago, there’s a sharper attention to detail and a much broader scope at bay, one that would shake the boots of even the strongest composers worldwide. What’s remarkable is that time isn’t really a problem anymore for Walker, who possesses the uncanny ability to overwhelm his followers within any duration.