The Babies – Our House on the Hill 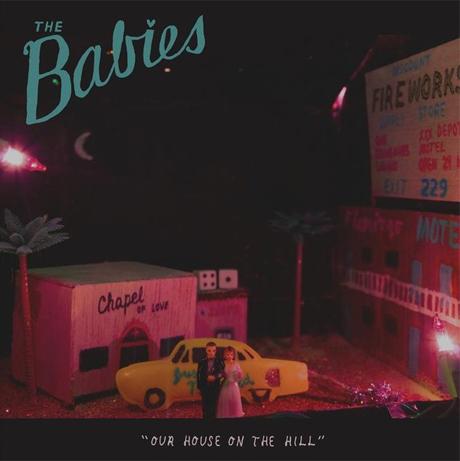 The Babies are Woods bassist Kevin Morby and Vivian Girls vocalist Cassie Ramone, who joined forces in early 2011 and knocked off a self-titled debut of brash, hooky guitar-pop. Less than half an hour in length, the debut mostly capitalized on its fast-and-loose slacker aesthetic; even in its restrained moments (“Voice Like Thunder”, “Sick Kid”), the Babies sounded ramshackle, raw, casually disaffected. And after two years of aggressive touring — capped off with two weeks of work with producer Rob Barbato in L.A. — they’ve reemerged with Our House on the Hill, a sophomore effort that sounds largely indistinguishable from the debut in its strengths and weaknesses.

Our House’s muted closing cuts expand the band’s range, but its heart lies in the brisk, three-chord garage-pop gems — simple enough for your local bar band, but with the added spark of Morby and Ramone’s vocal chemistry. Opener “Alligator” is a sugary, two-chord Woodsy shuffle; highlight “Slow Walkin” recruits Ramone’s backing for a forceful ‘60s-pop chorus. The band plays to their strengths — while any of it could have been culled from the last record, only “On My Team” and the hushed “Mean” (“You’re mean, mean, mean, mean/ And it hurts my feelings”) stumble from simplicity into banality.

Our House’s latter half drags out the tempos and offers a disproportionate share of acoustic material. Ramone’s geographically minded “See The Country” grows more plodding on repeated plays, but “That Boy” makes up for it, showcasing an uncharacteristically solemn vocal take by Morby — who whines over spare acoustic strumming. Even better is “Wandering”, where somber falsetto Oooh’s and cello accompaniment give the mix (and Morby’s vocals) an added weightiness. It’s The Babies’ most instrumentally rich piece yet and appropriately, it’s the closer: the track with the potential to transition The Babies away from their debut and into, well, toddlerhood.