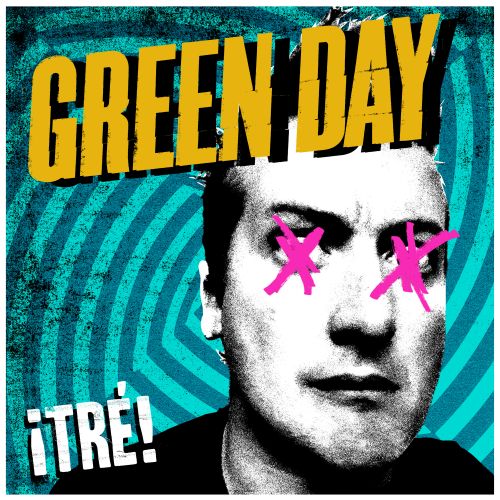 The Chicago Cubs’ Ryne Sandberg is one of the greatest baseball players of all time. He played the game the right way, he hit for power in an era when 2nd baseman weren’t supposed to, and he’s widely considered one of the best defensive players at his position to ever play the game. He retired before season’s end in 1994, but it wasn’t due to injury or age, it was because he lost the desire to play.

Sandberg said, “I didn’t want to play at a level less than what was expected of me by my teammates, coaches, ownership, and most of all, myself.” Sadly, many players don’t stop, can’t stop, and won’t stop. It’s that strange desire that resonates within all professional athletes; whether driven into them by coaches growing up, or just a part of their spirit once out the womb. This “can’t stop” mentality doesn’t end at sports, which sadly brings us to Green Day.

Green Day’s ¡Tré! is the finale of the band’s 2012 trilogy. Its earlier entries were the average ¡Uno! and the album-whose-rating-matched-its-title ¡Dos!, and ¡Tré! falls somewhere in the middle of these muddled albums. It’s a mixed bag that doesn’t reach the lows of a forced, guest rap appearance, while containing some of the best songs the trilogy has to offer. More importantly, there are songs on the record that could be used against the band if they consider re-entering the studio at any point in the future. These aren’t bad songs; their message is in their lyrics. It’s over. Walk away.

These aren’t meant to be harsh words toward the Berkeley trio. They’re part of a truth that needs to be told, no matter how dedicated the fan base is both young and old. When “not bad” is considered a positive note in a band’s ongoing existence, the end is not nigh, it’s already here. “Missing You” is not bad, with an impressive Mike Dirnt bass run during its coda and restrained Billie Joe Armstrong vocals, compared to his over-the-top and over-the-hill performance in the oft-dreadful ¡Dos!. “Sex, Drugs & Violence” is vintage Green Day, with its limited-use of guitar chords but still breathing with a catchy-enough chorus. “8th Avenue Serenade” teases changing time signatures; a sandbox the band rarely plays in. But these songs aren’t rock solid. They’re just “not bad.”

Unfortunately, the crystal-clean Rob Cavallo-production shines its sheen upon a genre that thrives on spit and raw power. Tre Cool’s drums are once more balanced with the vocals, guitars, and bass, occasionally with the piano and other orchestrations the band has absolutely given into since the maudlin “Good Riddance (Time of Your Life)” on Nimrod.  Look no further than album opener “Brutal Love” for an example of such criticism; “The Forgotten”, if you need two. It’s a stale production that has smothered these guys for too long. These issues were mentioned in the review for ¡Uno!, and though these songs are from those same sessions, it’s still disappointing. A change of direction for this band’s sound was dire just as much as they needed to get away from concept records, and they failed on this front.

The album’s most crucial, and most telling song, is “X-Kid”. It’s fitting that the best track on the record spells out the band’s end of days: “You’re numb to your old glory but now it’s gone,” “The shouting’s over and out / Over and out again,” “You’re not so young, but you’re still dumb / You’re an X-Kid and you never even got started again.” It’s a great song in a career full of them, but by coupling this with the lyrics of “Walk Away”, longtime fans will find a reality they may not want to accept.

What’s next for Green Day? As far as we know, Armstrong is still in rehab trying to get things together, and the best of luck goes to him, obviously. The band is likely to reschedule the dates they had to cancel post-breakdown, but after those dates with various cities and countries come to an end? Well, there’s a postscript to Ryan Sandberg’s 1994 retirement: he actually returned in 1996. Although the power was still there, the batting average plummeted, and he couldn’t elevate the Cubs to the division pennant as he had twice before. After battling injuries in ’97, he retired and never jogged out to the infield again.

If Green Day continues after ¡Tré!, Cool’s kickdrum will still pound furiously, Dirnt will still thud away on his bass, and Armstrong will strum those power chords. Like Sandberg in his return, the band won’t be bad, but if this trio of albums is any indication, they won’t be that good, either. There won’t be anything worthwhile. Just noise.