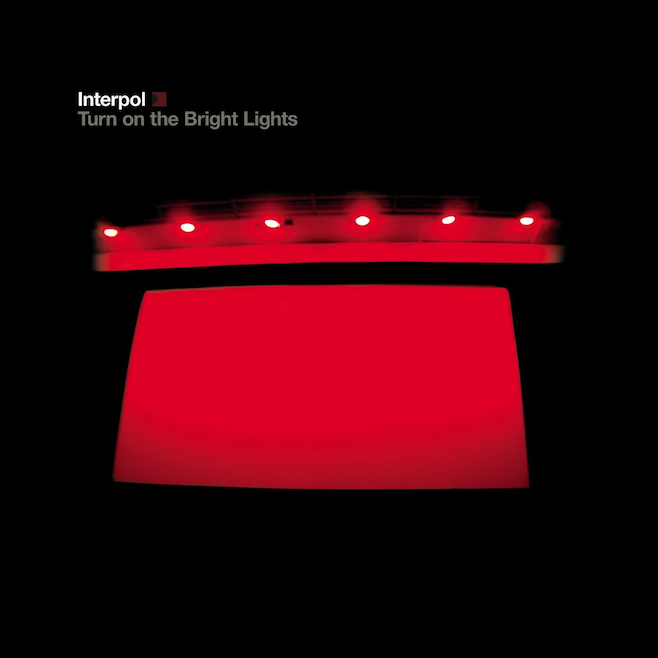 Turn on the Bright Lights was released in 2002, the same year The Walkmen released Everyone Who Pretended to Like Me is Gone, the same year Sonic Youth released Murray Street, and just a year after The Strokes’ Is This It? broke through. Interpol emerged from these same New Yorkian depths–part of a larger whole making music with vaguely similar qualities: dark, but danceable; guitar-driven, but atmospheric; catchy, yet enigmatic. New York Cool was back on the map, and some folks thought clumping The Strokes, Interpol, The Walkmen,The Yeah Yeah Yeahs, and the rest together as collective lynchpins of it’s revival was a great idea. But it was Interpol’s dark, dreadful sorry rock n’ roll that set them apart.

Turn on the Bright Lights had a swagger any young kid could mistake for pure confidence. It was propulsive and power-driven, not particularly slow and downtrodden. It possessed a distinctly upbeat darkness. Its discordance was melded into the shape of a late-night party, the smokey haze as blinding as it was infectious. It was happy about being sad.
It was, and still is, a record of paradox–one of confident self-doubt. It embraces its own paranoia with a raucous energy and a killer hook. While Carlos D’s staccato bass-lines lock antlers with Samuel Fogarino’s emphatic, break-beats and Daniel Kessler’s atmospheric contributions, Paul Banks’ low register wail is simultaneously apathetic and impassioned. He sounds like he’s being dragged out of bed to a nervous breakdown. Though at times it may seem like Banks is swimming free-style through Interpol’s pool of post-punk revival, he’s drowning in it. He’s hopeless. He’s helpless. Somehow he makes this all sound attractive.
“I had seven faces, thought I knew which one to wear / I’m sick of spending each lonely night, training myself not to care,” Banks sings on “NYC”, one of the record’s many defining songs. The New York Times writer/self-proclaimed life guru on irony Christy Wampole might find resonance with this defeated thesis statement. Interpol’s record perfectly describes the daily struggle of the sensitively hip from the inside out. Here was a band that dressed strictly in black formal-wear, who always looked outwardly sharp, yet were being eaten alive by personality-related anxiety on the inside; the specific anxiety that comes from the contradictory pressure to be cool and ironic in impossible reconciliation with the need and desire to earnestly express one’s doubts and frustrations.  The sort of anxiety that poses questions like “If I get there early will it be the right time?”  Interpol were ‘cool’ because they didn’t have a choice. Their songs were about the failure to fit into a mold with a smile.
The bonus features on this re-release package only further reveal this struggle. The demos, B-sides, and unreleased sessions oftentimes sound even bleaker and more helpless than what was officially released in 2002. When compared to the engineered perfection of Turn on the Bright Lights, it seems that at some point Interpol was tamed or reined in by somebody or something. “Gavilan (Cubed)” is nauseatingly anxious, its discordant guitar work and martial drumming pouring out like pure dread. Same goes for “Get the Girls”. The “Roland” demo takes death chant for a spin. The “Third Demo” of both “Stella”and “Leif Erickson” have Banks singing with more defeat, more pain, and more enunciation of the words that take us there. You can see this pained vitality written on the band’s faces in some of the live footage included here as well.

True, Banks’ voice could easily be mistaken by some for monotonous disinterest. The reason why it’s a bad mistake to make, though, is because there’s so much to glean from his words, and, in particularly, the manner with which he chooses to present them. On live recordings and early demos, there’s no question that he deeply cares about the words he sings. Like Ian Curtis, his delivery is a key to unlocking the distress in the poetry. These raw recordings point to a band unrefined at its core, one that worked hard to play to the strengths of these songs’ complexities and smooth out the rough edges.

With later Interpol recordings, the band tended to smooth these rough edges out until glistening–to cling to their hooks and celebrate their rock and roll swagger, without making sure Banks had something truly special to say along with it. At some point along the way, that depth went missing. Even a spin of Banks’ new solo record shows a disparity between the sheer vitality of Interpol’s youth and how that passion eventually staled into habit.

Turn on the Bright Lights was a record of both immaculate restraint and unchecked fear of modern living. The world still needs a record like this, so here it is, once again. The choice is still up to you.