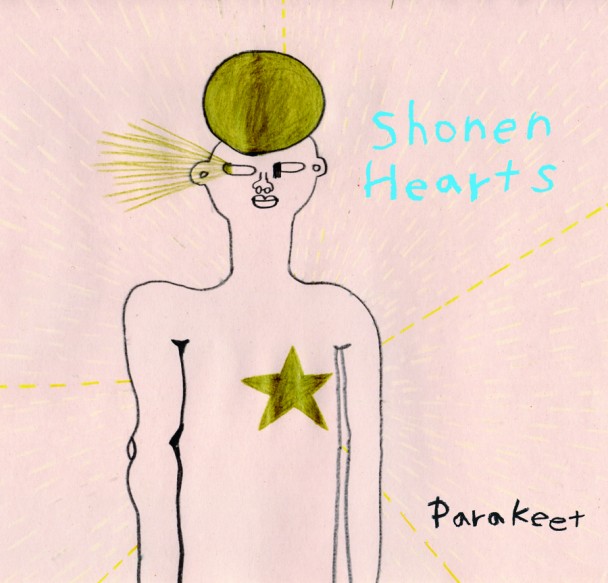 The members of Yuck proved to be wise beyond their youthful years with their self-titled 2011 debut, which won a lot of fans with its ability to revive the scuzzy, untethered sounds of indie rock’s early ’90s golden age. The band’s classicist sound, an unabashed throwback to the slacker noise rock largely perfected by bands like Dinosaur Jr., Sonic Youth, and Superchunk, might harken back almost 20 years, but damn if it didn’t warm the still beating hearts of snobbish indie rock purists young and old.

With no promise of a new Yuck disc in the immediate future, fans can take comfort in the fact that the band’s members have been busying themselves with other projects of equal ear-splitting splendor. Parakeet, which pairs Yuck bassist Mariko Doi with guitarist Jon Jackson and drummer James Thomas, owes a similarly raunchy debt to the Yuck’s shoegaze and distortion-caked musical pedigree, albeit with a few twists. Shonen Hearts, the trio’s debut EP, puts a boy-girl wrinkle into the formula courtesy of Doi’s vocals, but the group isn’t as sweet and innocent as its name or setup might imply. Instead, the record’s six tracks speak of a side project cut from the same punk energy and scrappy DNA of its big brother.

The splashy cymbals, pronounced drums, punchy bass, and wall of sound guitar of “Toumono” tell the tale of the record straight away, setting the tone for a brief but punchy collection of crunchy, melodic guitar pop nuggets. Lyrically, Doi’s vocals largely get buried under the muck and the mire, but they still add their own charm to the spirited alt-rock charge of “Bananafish”, the grungy squalor of the album’s title track, and mid-tempo fuzz rock of “Darumasanga”.

In the end, Shonen Hearts is exactly what it is, namely a short diversion while Doi’s main musical squeeze lays low. But it’s a fun, no frills detour that will no doubt hold Yuck fans over until further notice.