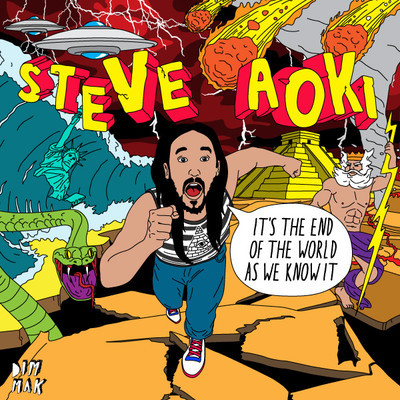 Steve Aoki is that guy you want as your wingman. The Los Angeles-based producer knows how to throw a banging party, makes sure to continually rep his friends and possesses an intellect that would surprise many that have seen his rider and read about his trampoline debacle. Aoki’s electro-house is based in the more-is-more club culture, but hidden beneath the 128 BPMs of the three-track It’s the End of the World As We Know It EP are notions of emotional transcendence and infinite human existence.

Inspired by Raymond Kurzweil’s The Singularity Is Near, Aoki teamed with frequent collaborator Annger Dimas to construct a massive late-night anthem that reflects the book’s notion of human and technological symbiosis. The result, dubbed “Singularity”, blends the urgency of electro with the uplifting female vocals, courtesy of My Name Is Kay, of progressive trance and envelops the listener within a dimension of percussive turbulence and feminine warmth. Kay’s recurring hook, “We are going to live / We’ll never die,” not only embodies the result of singularity but the mentality of revelers amid the chaos of Aoki’s live sets.

Miss Palmer fortifies the EP’s female presence with her soaring vocals on “Omega”. The track shares many of the techniques of “Singularity”, but Aoki destroys the song’s initial melody with a series of cataclysmic synth and bottom-end shifts. The break lasts only 30 seconds, but it offers ample opportunity for bass-music reconstruction.

That bombastic mentality is nearly eliminated during “Transcend”. In light of the album’s theme, if the end of the world does come, all voices would go silent and souls would be relegated to some unknown void. However, Aoki hasn’t necessarily composed an album for End Times, but for times different as we know it, a sentiment that we can all carry into the new year.