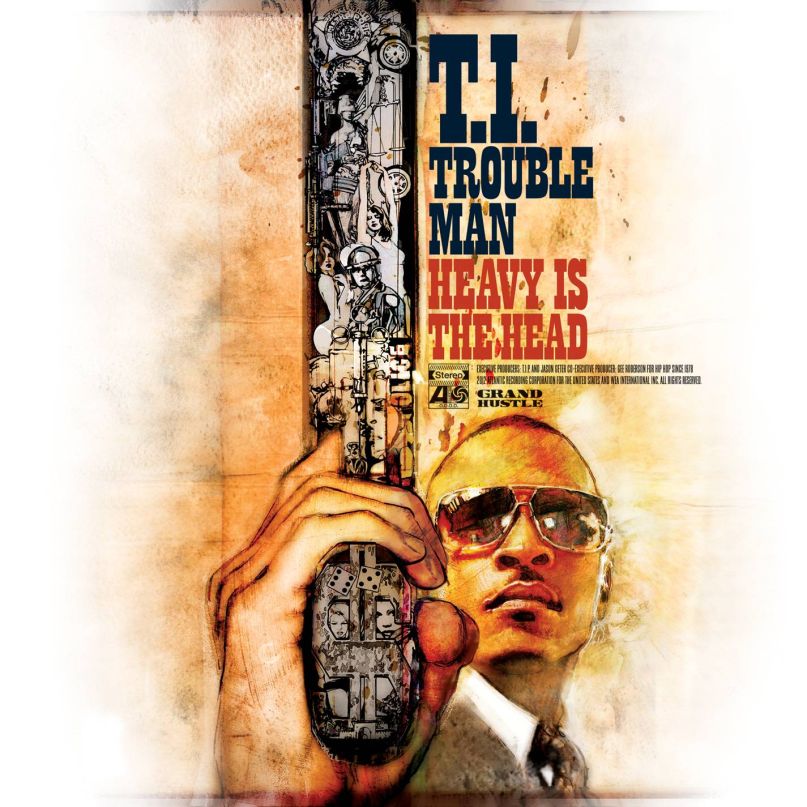 Trouble Man: Heavy Is the Head’s title alludes to T.I.’s long history of legal transgressions, which begins when the Atlanta native was a teen in the late ‘90s and ends (for now, anyway) with a 2010 drug charge that led to an 11-month sentence. On the album, his eighth, Tip spends more than a little time holding forth on the motives, rewards, and, especially, long-term penalties of his criminal mindset, peaking with an admission that “I wanna change, I swear.” But instead of opting for his own version of, say, Drake-style meditation, Tip mostly sticks to the sound that’s served him well his entire career: richly produced Southern thump made all the more impressive thanks to his crisp, energized delivery and songwriting acumen.

Tip has purportedly recorded over 120 tracks in the year or so since he finished that last bid, and there are times when Trouble Man does seem like the product of a creative period that fertile. He snarls his way clear through the sample of Marvin Gaye’s own “Trouble Man” on “The Introduction”, meanwhile essentially putting on a clinic for how every rapper should open an album. Three tracks later, A$AP Rocky joins things for the spaced-out “Wildside”, and amazingly, it’s an even more fortuitous pairing than the great André 3000-assisted “Sorry”. The album cools off about a third of the way through its 70 minutes, but arriving later are highlights “The Way We Ride” – which sounds even better next to Big K.R.I.T.’s immaculate “Money on the Floor” and is maybe Tip’s best car song since 2006’s “Top Back” – and the kinetic brass-stomp of “Addresses”.

From 2003’s “24’s” to last year’s “I’m Flexin’”, Tip has been responsible for some of the best rap singles of the past decade. Weirdly, though, Trouble Man only fails during its biggest, most pop-oriented moments: Cee Lo Green’s appearance on “Hello” pretty much distills why he’s being shunned by Goodie Mob diehards, while the P!nk-featuring “Guns and Roses” goes over exactly as well as you’d expect a P!nk-featuring T.I. song called “Guns and Roses” to. Sure, having been without a top-ten single since 2009’s “Dead and Gone”, Tip might be eager for another major hit. But fortunately, most of the album finds him delivering more modest pleasures, which, at least at the moment, work just fine, too.

Essential Tracks: “The Introduction”, “Wildside”, and “The Way We Ride”