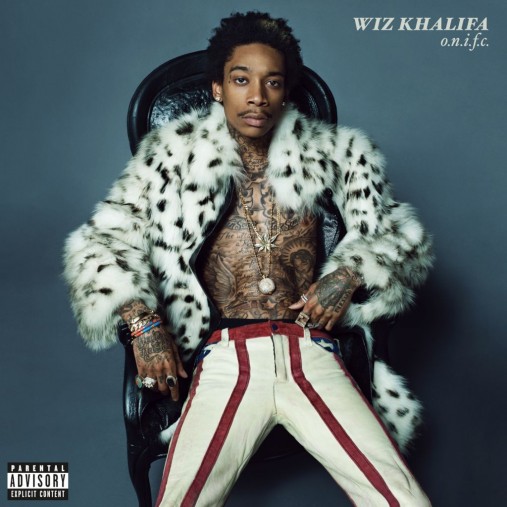 In 2010, Wiz Khalifa dropped his Kush & Orange Juice mixtape, 20 tracks of breezy near-cloud-rap that meshed perfectly with the then-22-year-old’s zero-expletives-given persona. In 2011, he made his major-label debut with the pop-hop sparkle and chart-mounting singles of Rolling Papers. Here, Wiz jumps from style to style indiscriminately, going for atmosphere that would have fit in just fine on the former project (“Paperbond”, “Bluffin’”) and radio-bait more appropriate for the latter (“Let It Go”, “Work Hard, Play Hard”). It is not a cohesive album, and it doesn’t try to be. That’s not the worst of its problems.

Wiz has never been, and probably never will be, much of a lyricist. Instead, he writes for perma-hazed teenagers eager to update their status with one of his indispensable maxims – “Stackin’ cheese ‘til my bread right / Smokin’ weed ‘til my head right,” etc. On O.N.I.F.C., though, Wiz lets loose too many lines that look incongruous on paper and don’t fare much better when magnified by his occasionally awkward flow: “So much money that when I pull up / Hop out and walk in, the bank teller look at me funny.” (It’s also easy to get the sense he might be saying something he doesn’t really mean: “I’m the shit, literally.”)

When all else fails, Wiz’s saving grace has historically been his ability to craft an epoxy-sticky hook at will. But even that particular gift of his is mostly absent here. The album’s most memorable melodies come from Akon on “Let It Go” and The Weeknd on “Remember You”; Wiz’s own hooks are almost always too corny, too repetitive (repeating a phrase over and over, especially one as easy as the titular one on “It’s Nothin'”, tends to be a cheap way of doing things), or both. Wiz doesn’t often come across as having much of a direction, but things like that are what make him strike as more lost than ever here.