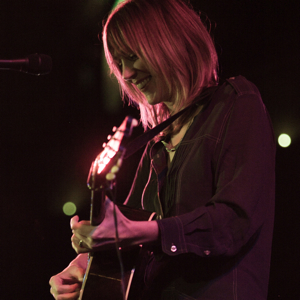 As impressive aurally and visually as it is, the Union Chapel can still be a daunting stage even for a seasoned performer. For an artist returning to tour her first album in six years without the comfort blanket of a backing band, any nerves were perhaps understandable. Beth Orton, though, had no reason to be fearful with husband Sam Amidon by her side and a largely middle-aged, home crowd of loyal fans. (Clearly most weren’t teenagers when Orton released her Trailer Park debut 16 years back.) A combination of this ultra-respectful crowd, content to offer their applause and at times call out requests between songs, and a cold night within and outside the Chapel soon added to the austere feel this building can sometimes lend to events.

After a capable warm-up set by Amidon on guitar, banjo, and vocals, with some accompaniment by piano and drums, one expected Beth Orton to take the stage with more than just her guitar. Yet no band beckoned. The singer looked dressed more for the country than city in her long casual jacket, blue jeans, and two-tone brogues. Her fine features and cute, upturned nose peered from a curtain of hair, recalling Marianne Faithful in her prime. Opening with Magpie, the first cut from her fine new album, Sugaring Season, Orton had to start the song again midway through after an unwanted drone turned to feedback. Her confident guitar picking and bold, leaping vibrato should have been enough to deflect the nerves but the artists brittle stage confidence seemed affected.

To her credit, as the set progressed, Orton fought off the nerves with her intensely heartfelt vocals and ever assured guitar, scarcely needing to be as apologetic about the odd sound blip as she was. Amidon joined in from time to time; his soft acoustic lead fills on State of Grace and expressively mournful violin on the Blake-to-music Poison Tree particularly hit home, while the US singer offered sympathetic counterpoint harmonies to Ortons laid-bare inflections.

Mixing the entire new album with back catalogue favourites like the hypnotic Central Reservation and dramatic Concrete Sky, Ortons vocal at times recalled the melisma of Joni Mitchell and the purity of Sandy Denny. The emotive piano ballad, Something More Beautiful, was re-imagined as a simple guitar piece, her strumming becoming increasingly strident in the choruses. Pianist Nico Muhly joined Orton for the exquisite Mystery and while the live version lacked the subtle layering of the recorded song, Muhly teased some fine cascades of delicate notes to complement Ortons fragile delivery. The insistent Shopping Trolley and a suitably cheery Call Me The Breeze, though totally different in feel, came close to matching those earlier, esoteric heights.

Orton closed the evening with a three-song encore, ending with an affectionate version of the Goffin-Goldberg classic, It’s Not the Spotlight, made most famous by Rod Stewart. It drew a standing ovation from a number of the crowd and while Orton might not have been totally at ease in the blue and red bathed stage light tonight, she left on a pleasing high.