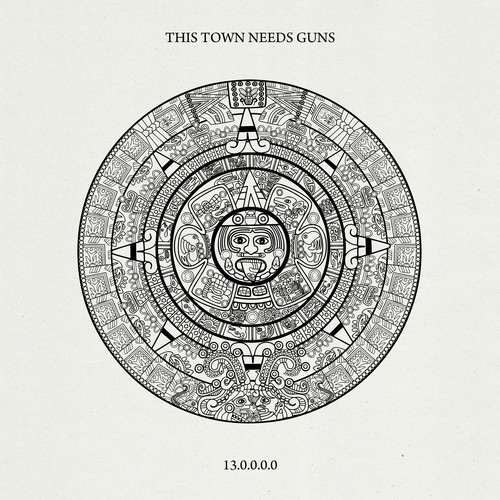 If anyone’s reading this, it’s a pretty safe bet the apocalypse never happened!

Despite the good news of our continued existence, we still have to deal with a day of ceaseless tweets and Facebook posts, pointing out the absurdity of the End Days with asinine hashtags and irritating memes. But if we’re to live through such a humor-geddon, then there should be at least one bright spot of Doomsday-related talk worth consuming.

Cue Oxford-based math-rock band This Town Needs Guns. After their zoo-centric 2008 debut Animals, the band’s sophomore LP 13.0.0.0.0 focuses primarily on the end of the Mayan calendar. But rather than utilizing the doom and gloom aspects, drummer Chris Collis said the band explored the concept as a force for positivity and creative rebirth.

“The completion of 13 b’ak’tuns (occurring on 21st December 2012) marks the creation of the world of human beings according to the Maya. It is more the completion of a cycle rather than necessarily being a destructive event such as the end of the world which some people predict. It was this idea of completion and progression that we wanted to incorporate into the album and artwork.

The notion of change has been a large part of our band recently, having lost a singer and then a bass player. We felt as if a cycle had been completed with the old lineup and a new cycle was now starting with Henry (Tremain), our new singer/guitarist/bassist/wunderkid. It also contains the idea of progression as a band. Though Maya texts say nothing about what might happen at the 13th Bak’tun, we do know that the end of each bak’tun was considered a time of great change.”

And that upheaval has led to an album of intricate yet uncomplicated prog rock, encapsulated with the single “I’ll Take the Minute Snake”. Musically, the track facilitates a vibe similar to the limo scene from 2012: ceaseless forward momentum of crashing drums and slick guitar and bass grooves right into the ending refrain of glitchy noises. While it’s all destruction aurally, the lyrical content presents hope, with the protagonist longing for a re-connection amid the firestorm of sounds, aided in part by Tremain’s evocative yelps. Stream it below.

13.0.0.0.0 hits stores on January 22nd via Sargent House (pre-order your copy here). Be sure to also check out the slightly mellower “Left Aligned”.