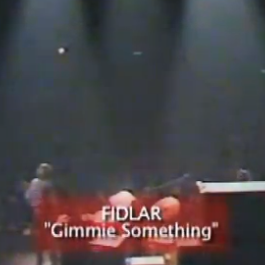 No, you’re not suffering from some weird neurological misfire in the visual cortex: Los Angeles skate punks FIDLAR really have mashed their song “Gimme Something” with performance footage of iconic rockers Creedence Clearwater Revival (apparently, taken from the days when “cocaine was good for you”). Despite whatever severe legal ramifications this may illicit, it’s pretty life-affirming to see John Fogerty and company screaming and shouting like gnarly punks while rocking tight flannel shirts and mountainmen beards and bowlcuts. Watch and squeal with glee below.