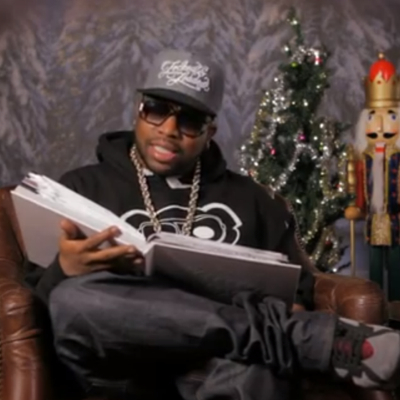 There’s always room for story time during the holidays, and here’s something that puts your Cousin Vinny’s ham-carving tale to shame. With Christmas around the corner, Big Boi took a break from promoting his latest album, Vicious Lies and Dangerous Rumors, to kick it with some Dr. Seuss. Now, tradition has it that someone must tell the tale of How the Grinch Stole Christmas!, so why shouldn’t it be General Patton, or Daddy Fat Sax, or Sir Lucious L. Leftfoot, or The Son of Chico Dusty, or Sgt. Slaughter, or Antwan André Patton? Theodor Seuss Geisel would certainly approve of a narrator with such a volition for pseudonyms. So, if the office totally blows chunks today, find a cozy nook, spike the coffee, and let Big Boi whisk you away to Whoville below. It’s pretty hilarious.

In related news, we recently spoke with the guy about Tootsie Pops.