Foxygen – We Are the 21st Century Ambassadors of Peace and Magic 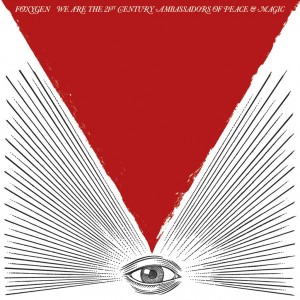 Foxygen’s Sam France and Jonathan Rado are friends who hang out (get high) and jam together. In 2011, they four-tracked some unfinished ditties, and rather than fleshing them out, spliced their fractured ideas together into Take the Kids Off Broadway. Released last year as Foxygen’s debut LP, it’s a mashup of stoned-in-the-bedroom tomfoolery.

That was then. Regarding their new record, France told Aquarium Drunkard, “Our new songs are simpler, pop-song kinda style.” We Are the 21st Century Ambassadors of Peace and Magic is pure pop because it has to be: The chaos of Take the Kids was too hard to teach to Foxygen’s touring band. Rado and France had to write with structure and intention. In the process, they’ve proven themselves to be excellent tunesmiths, borrowing from ‘60s psych-pop influences without eschewing their enchanting idiosyncrasies.

For example, “San Francisco” — with its rinky-dink glockenspiel and supple string section — references The Zombies aesthetically, but the playfulness of the melody and words (“I left my love in San Francisco / That’s okay, I was born in L.A.”) is 100% Foxygen. On “No Destruction”, France impersonates Dylan’s cadence and inflection, singing about hot-boxing subway cars and talking with his disabled grandmother (who lost her limbs in the war, when aliens bombed her cigar store). It verges on parody, but it’s damn catchy.

Occasionally, this irreverence backfires. The shouted debauchery of the title track is cloying, and druggy compositions like “In the Darkness” and “Bowling Trophies” meander. But then you hear “Shuggie” — something you can sing along and dance to. With its ominous verses and valiant refrain, it’s the finest three minutes of Foxygen’s young career.

For a band that just started writing pop songs, this sophomore LP is an impressive outing. Foxygen owe a lot to their sonic influences, but everything else — the lyrics, the artwork, the humor — is their own.