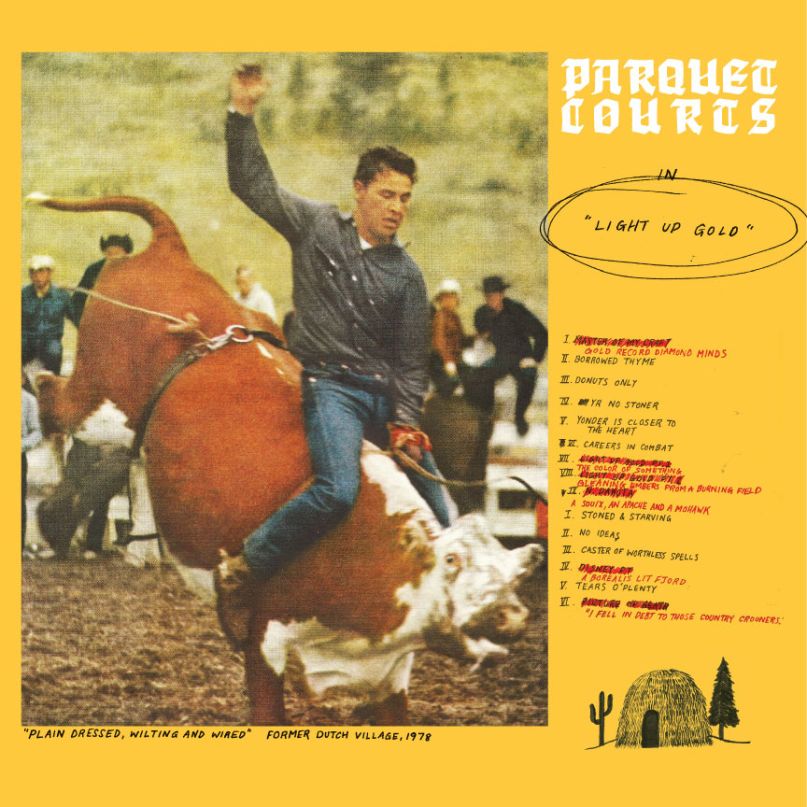 What starts off like a Dead Kennedys album on mescaline, ends like a warped Big Star 7″ single. That’s Parquet Courts for you: bratty, messy, loud, and full of heart. On their second full-length, Light Up Gold, Texas transplants Austin Brown and Andrew Savage discover America through the eyes of a beatnik slacker, who says shitty things (“People die I don’t care, you should see the wall of ambivalence I’m building”) yet speaks of acidic truths two steps later (“Death to all false profits around here we praise a dollar you fuckin hippie”). For an album crafted by late twentysomethings, the band’s two principal songwriters really managed to scribble out the journals of a teenager living on the side of the road, carrying nothing but old receipts, some Swedish fish, and a bindle of angst.

Yet that’s what’s so appealing about it. It’s full-on escapism for those on the cusp of adulthood, where the only thing that waits is responsibility and what many might see as the death of freewill. This album has everything a late twentysomething might look back on; there’s the unnecessary existential dilemma (“Borrowed Time”), those wasted, lazy days (“Stoned and Starving”), that disappointing drive less traveled (“N Dakota”), the finger to oppression (“Donuts Only”), and the wall of ignorance (“Yonder is Closer to the Heart”). Being young does have its share of faults, but there’s also this sense of disregard that’s unlike any decade in anyone’s life — in other words, it was okay to be a slacker who didn’t know what to do.

So, as Savage told us recently, “There are some themes on the record that can be easily understood, like loneliness, but things like the flaws of stumbling through adulthood probably couldn’t be understood by a teenager. They wouldn’t get it.” Once again, (and why this should ever be surprising is beyond me), but the artist knows their record, and he’s not wrong. Light Up Gold may sound like a string of slacker anthems, but it’s so much deeper than that. It’s a collection of fears, it’s a volley of self-reflection, and it’s Dharma Bums for tomorrow’s thirtysomethings. Whether or not that always translates doesn’t really matter, especially since it all comes off like the tail-end of one wild party, where the door’s left open and there’s just enough party favors to duck out with. Still, if you get the chatter, the favors are secondary — and that’s where one truly strikes gold.