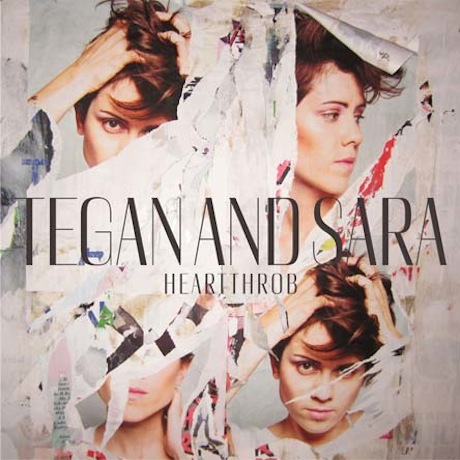 Whether they’re from the wrong side of town or just from Canada, heartthrobs have long been the pulse of pop music. They start the fire, the spin us right-round, they inspired Kelly Clarkson to quote Neitzsche. And now they’ve given Tegan and Sara a reason to dance. Their seventh studio album, Heartthrob, takes the indie-rock duo in a synthpop direction.

No song in their 15-year repertoire welcomes the transition more than “Now I’m All Messed Up”. The song blends the pacing of an R&B jam with the kick-drum exaggeration of a power ballad. “Why do I take this lonely road, nobody to walk with me?” Tegan wonders. At 33, the Sisters Quin are beyond hormone-soaked self-pity, but they’re savvy enough to channel it for a pop album.

The Quins’ distance from teenagerdom allows them to approach those volatile memories with deeper consideration. I can’t live with all the things I say,” go the lyrics to “Goodbye, Goodbye. They may be at a loss for words, but the delivery is clear and controlled and has never sounded more confident, backed by an enchanting production that illuminates Tegan and Saras bait-and-switch style duets. The words have plenty of room to dither and do whatever teenagers do — Tegan and Sara have the rest of the song on lock.

In this vein, Heartthrob counterbalances juvenility with an aged technique. Immaculate harmonies, taut call-and-responses, and major-key tenderness round out the album. This level of musicianship has been honed for years, from the surprising chord reversals on The Con to the studio flirtations on Sainthood so its unfair to call Heartthrob a departure — its more like a calculated step forward. And where the synths pause, a piano scale unravels. When Tegan asks “Do you remember?”, a bloom of harmony recalls. I Was A Fool takes a long look at failed romance through a dulcet split vocal. It sounds a bit like the Corrs, only its magnificent.

Heartthrob invokes somber, marble notebook dumps as truthfully as it portrays its lustier foil. Closer is, to paraphrase Lena Dunham, a “tits-out” tribute to not getting to know someone. All I dream of lately is how to get you underneath me, Tegan sings. The two are more polite than Nine Inch Nails, but not by much. The single is the best pop song of 2013 so far and the credit is largely due to producer Greg Kurstin (Ke$ha, Kelly Clarkson). But Closer, and similar songs I Couldnt Be Your Friend, Drove Me Wild, pull back on the reigns of contemporary schlock-pop. The vocals dont compete with a rocket launch or dub-step drop. Instead, Tegan and Sara sound like La Roux crossed with Toni Basil. Genius levels of fun.

Who knew that the duo had such a flavor for bombast? How Come You Dont Want Me flags down a douchebag a mile away with a cocky chorus that asks: Why dont you want to show me off? Declarations, accusations, and percussion punches persist on Im Not Your Hero and Shock To Your System. If Pat Benatar and Neil Geraldo were reincarnated as an indie band from Canada — alas.

Heartthrobs connection to music of the early ’80s isnt trite  its a treat. The nasal/soft vocal switch off almost seems like the album itself is engaged in a private debate over whether Time After Time or All Through The Night is the superior Cyndi Lauper ballad  – both influence Heartthrob immensely. But once you start there, a spectrum of coiffed divas come to mind. Ann Wilsons undying vocal in What About Love. Madonnas vulnerability on Crazy For You. In the early ’80s, these pop singers (notably Lauper) were often cited as latter-day ’60s girl groups. Today, one might say this was a stylistic (and sexist) stretch. The element both eras do share is their heartthrob-crazed context: The sweeping repetitions, the star-gazing, the high stakes, the cycles of deprivation and need.

It all circles back to heartthrobs — the fantasies that come and go as abruptly as the closing of a locker door. After all, the canyon between lust and heartbreak is the space all great pop songs occupy. Tegan and Sara have known this for a long time, but with Heartthrob, they fill the canyon with great meaning and melodies — enough to Flashdance from one end to the other and back again.