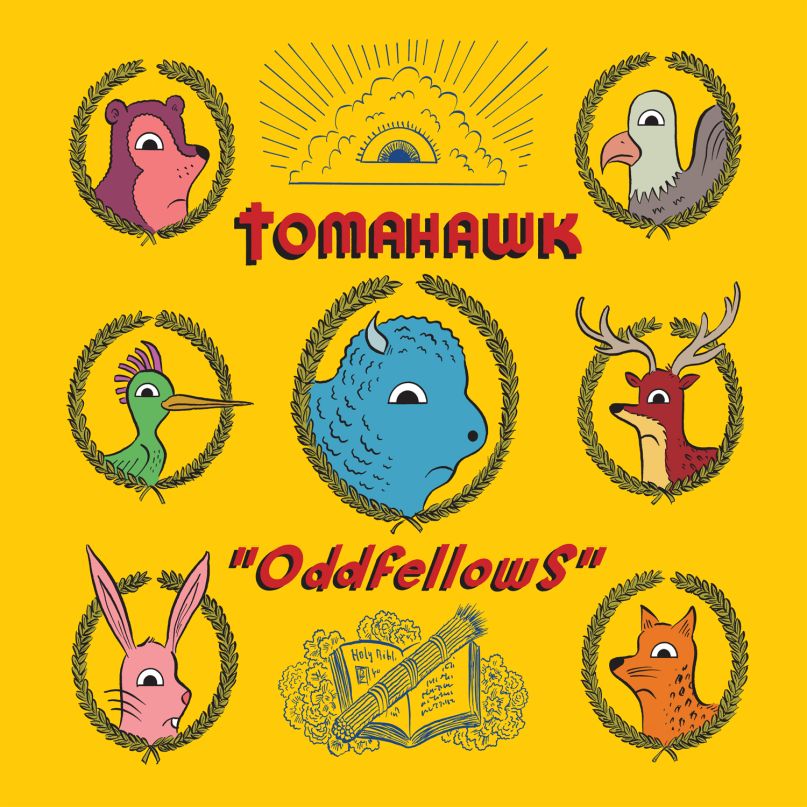 When we last heard from Tomahawk on 2007’s Anonymous, the group had set aside some of its more eclectic tactics for an album inspired by Native American imagery and concepts that founding member Duane Denison had encountered while touring with Hank Williams III. Prior to this self-described detour, the band also parted ways with original bassist and former Melvin Kevin Rutmanis. Now, after six years, the veritable supergroup has returned with its fourth release, Oddfellows. And just to be clear, this is not a reunion. If anything, Oddfellows marks a re-launching of Tomahawk, complete with new bassist Trevor Dunn, who more than fills the vacancy left by Rutmanis.

Denison recently described Tomahawk as “what we do when we want to rock out and just go nuts and have fun”. Oddfellows is the result of the approach. Recorded at Dan Auerbach’s Easy Eye Studios in Nashville with producer Collin Dupuis, Oddfellows picks up where Tomahawk’s 2003 sophomore album Mit Gas left off. Tomahawk’s latest effort easily traverses straight up quasi-punk rockers with brooding, haunting melodies akin to Fantomas-lite tempered by latter-day Faith No More. However, Dunn’s presence introduces a modicum of jazz architecture to the foundation of tracks like “Rise Up Dirty Waters”, and in doing so, doesn’t necessarily evolve Tomahawk’s sound but certainly elevates it some. All throughout Oddfellows Dunn’s bass provides a warmth not necessarily found on the band’s first couple of releases.

As with any group that has a membership like Tomahawk’s, the word supergroup gets tossed around followed by a quick mention of who it is in the group that makes it so ‘super’. In Tomahawk’s case its membership is comprised of Denison (The Jesus Lizard), John Stanier (Helmet, Battles), Dunn (Mr. Bungle, Fantomas, Trio Convulsant), and Mike Patton (Faith No More, Mr. Bungle, Fantomas). However, as with anything involving Patton, the contributions of the other members quickly gets overshadowed by everyone pointing the spotlight at Patton. In fact, more often than not, the other members are forgotten almost as soon as they are mentioned. Though this is somewhat understandable, taking into account Patton’s “genius” and all, it is a terrible disservice to both the band and its other members, because, regardless of Patton’s presence, Tomahawk is a group of four musicians, not one, and each of them contribute parts of themselves to create the larger personality.

Upon initial listen it can be easy to get overwhelmed. Patton’s personality and voice loom large over the album and there is a tendency to focus on the louder, more aggressive elements, as with the Helmet-esque pounding on “The Quiet Few” or the equally percussively propelled “Waratorium” and “South Paw”, a track that also demonstrates Dunn’s juggernaut bass playing. However, after subsequent listens, the album opens up, especially during the quieter moments, the spaces in between the chaos, when subtleties and nuances bloom. Initial single “Stone Letter” is a perfect example of both the chaos and the calm with Denison and Stanier revealing a finesse in their playing peppered between Patton’s explosive chorus.

The haunting “A Thousand Eyes” creeps along, gently luring you in and wrapping you up in a warm blanket only to reveal itself to be a straight-jacket; while other tracks such as “Rise Up Dirty Water”, “I Can Almost See Them” and “Baby Let’s Play ___” equally intriguing, have been described as songs perfect for soundtracking B-grade horror films. Nowhere near the horrorscapes associated with the likes of Fantomas, the films these songs would soundtrack would be more akin to Dario Argento on Xanax. Despite the occasional explosive swell, these songs are so deceptively laid back one could easily re-imagine them performed by the likes of Nick Cave and the Bad Seeds.

Tomahawk fans should find Oddfellows appealing and certainly worthy of following up Tomahawk and Mit Gas. However, aside from initial single “Stone Letter” and its vitriolic chorus, most won’t come away humming many of the hooks or melodies, the way one might after listening to a Faith No More album. But then again, Tomahawk was never that kind of band to begin with, instead preferring to reward the patient listener over time.