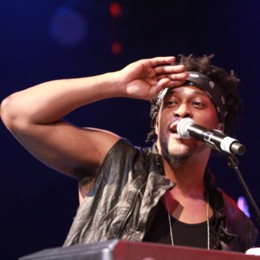 D’Angelo’s long-in-the-works third album is “99% done” and will likely be turned over to RCA Records in time for a 2013 release. At least, that’s according to The Roots’ Questlove, who serves as the album’s producer.

“All last week, I was in the studio finishing (the album),” Questlove explained in a new interview with Billboard. “We spent close to 18 hours, well not me personally because I have to go to ‘Fallon,’ but usually right after work. He’s the only person that I’ll actually go to the studio with and stay there to six in the morning, re-doing these drum parts. I won’t even do that for my own band, but I’ll do it for him. Right now, we’re just tightening up the loose ends. But I still stand by, 99% of it is done.”

He added, “If this record is not turned in by February, then something is extremely wrong. Because we worked to the bone in the entire month of January just to tighten up all the loose ends.”

As an album some 13 years in the works, the follow-up to 2000’s Voodoo Child doesn’t really need any more hype. However, Questlove is using words like “totally brilliant” and “classic” to describe the new material.

“I would not be far off by saying this is probably my generation’s version of Sly (and the Family Stone’s) ‘There’s a Riot Goin’ On.’ It’s potent. It’s funky. It’s an extremely hard pill to swallow. He’s one of those artists that have, of course, taken 13 years to follow up a record. It’s going to take you about 10 years to digest this record. Totally brilliant. Just the way this society works with music being able to judge if something is a classic after the first listen, you can do that after thirty seconds on this. And the fact that we started this record in 2004, and it still sounds like it came out five years from now, it is a testament to the timelessness of it.”

Questlove didn’t mention any specific track titles, though D’Angelo has previewed several new songs in recent live performances. Below, you can watch his performance of “Sugar Daddy” at last summer’s BET Awards.

In the same Billboard interview, Questlove also confirmed a 2013 release for The Roots’ 17th studio album, along with a forthcoming collaboration with Elvis Costello.