Dusting ‘Em Off: The Postal Service – Give Up 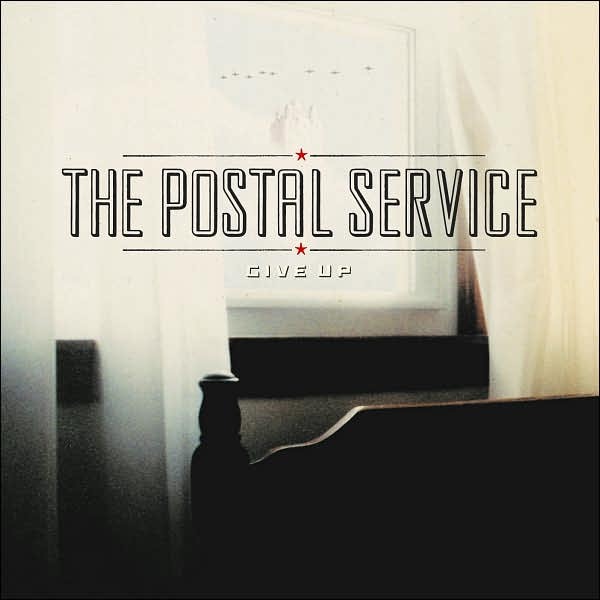 Before Soundcloud, Skype, FaceTime and scads of social media outlets and cloud computing platforms made artistic collaboration exponentially more seamless and instant, musicians put ideas on answering machines, tape recorders and paper before recording them. Crazy, right? And to get musical ideas to one another for long-distance collaboration, they actually sent it by snail mail. How did artists ever collaborate this way? How did we ever live like this?

This is how The Postal Service – the recently reactivated project of Death Cab for Cutie singer-songwriter Ben Gibbard and Dntel’s Jimmy Tamborello – collaborated over five months in 2001 and 2002, a slow pace by today’s standards. The now-outmoded form of delivery they used, the U.S. Postal Service, was tagged as the unassuming project’s namesake. Looking back, Gibbard and Tamborello could’ve never prepared for how successful their project would be. Having never met before, they found collaborative kismet in Dntel’s 2001 critical hit “(This Is) The Dream of Evan and Chan”, to which Gibbard contributed vocals and lyrics. They recorded it in an hour, using Gibbard’s first vocal take. What followed was a fleshed-out continuation titled, Give Up, which Sub Pop is reissuing as a deluxe edition next month to commemorate its 10-year anniversary.

The decade since the release of Give Up is much further away technologically than it is chronologically, which makes it only seem like a very long time ago. The album’s themes deal with this nostalgic, technological distortion. On “Sleeping In”, Gibbard daydreams of a dystopia with silver linings when he suggests “we can swim any day in November,” using Robert Smith’s lyrical devices to make the seemingly cheery imply gloom, which he doubles down on during “We Will Become Silhouettes”, lamenting about a “cupboard with cans of food/ filtered water and pictures of you.” “Recycled Air”, “This Place Is a Prison”, and “Brand New Colony” further these themes of anxiety, ennui, change, and post-apocalyptic malaise. The half of Give Up that doesn’t romanticize girls (and heartbreak caused by girls, Gibbard’s usual M.O.) works as a less-abrasive, tuneful, poppy foil to the future-shock paranoia and circuit-bending glitch of Kid A, released only a few years earlier

Let’s take stock here: The fact that The Postal Service caught lightning in a bottle creatively, critically, and commercially was a gift that the music industry doesn’t often receive. For Gibbard and Tamborello, everything happened at the right moment, which has always warranted the question: Could they catch lightning twice in the same bottle? Probably not, and that’s something the two collaborators would likely agree with, especially Gibbard. In the past, he’s firmly denied any possibility of a second Postal Service record, and yet now there’s that Coachella reunion looming on the horizon. How do you sustain the flash of electricity that Give Up captured? Do you just play it rote or make it genuine?

The genuine article of The Postal Service contains contradictions in creation, context, and content that are so pronounced through a decade’s worth of hindsight. Months after Give Up’s release, Gibbard and Tamborello were given a cease-and-desist letter by the U.S. Postal Service in an attempt by the federal government to defend its copyright. Negotiations were had between the band and the USPS and some facile cross-promotion that could write itself seemed like it was in the works. But four years later, “Such Great Heights” appeared not in a USPS commercial, but in a UPS commercial.

On the musical end, Tamborello’s Postal Service (and Dntel) work has an analog-digital duality, using gorgeous, twinkling Korgs and Moogs, cut up in post by Apple’s Logic Pro software. Commonplace now, sure, but not so much 10 years ago.

Of course, what made Give Up truly special for its time makes it seem quaint now. Until its ambiguous, new teaser page, The Postal Service’s website stood as an early-‘00s time capsule of web design. Creatively, Give Up was an aberration for Gibbard and Tamborello as well. Since 2003, Gibbard’s lyrics have rarely reached the dystopic depths they do on “This Place Is a Prison”. It’s almost inarguable that the side project was a catalyst for Gibbard and Death Cab for Cutie’s milestone album, 2003’s Transatlanticism, which bubbled out months after Give Up (though, around the same time the side project really caught on). To date, neither Death Cab nor Gibbard’s solo work has brushed the diversity of musical sounds and textures that Tamborello brought to the table here. It’s no wonder the Dntel mastermind laid low soon after, finally releasing Dumb Luck some four years later.

Whatever Gibbard and Tamborello decide to do with The Postal Service’s legacy in the near and distant future, the personal, off-hand intimacy of Give Up will be hard to shake. Gibbard’s lyrics are spiritual, conversational, and easy to get wrapped up in, like a supportive note written by a good friend after you’ve had a bad day or the sweet text message you get from a lover. While Tamborello’s music has a hint of analog garble and scratch that still sounds bubbly and beautiful. If a decade of distance gives us any perspective on Give Up, let’s acknowledge that it’s gentle, unassuming bedroom pop that surrenders your heart to the world and leaves you in bed the whole morning — likely smiling.